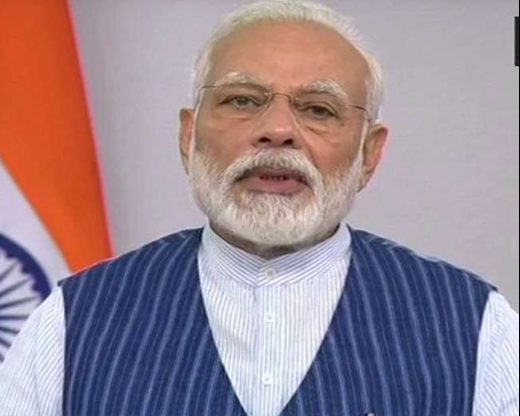 New Delhi, ANI . Amid the ongoing war against Corona and tensions along the border with China, PM Narendra Modi is going to address the country at 4 pm on Tuesday. Since becoming Prime Minister, PM Modi has addressed the country 12 times till now. Today will be his 13th address. Let me tell you that while the figures of corona virus are increasing rapidly on one side of the country, on the other hand tension with China remains intact after violent clashes in Galvan valley. In such a situation, PM Modi’s address to the nation on Tuesday is considered very important.


It is worth noting that earlier, Prime Minister Narendra Modi while addressing the countrymen through Sunday ‘Mann Ki Baat’ program, mentioned the soldiers who died in Ladakh from Corona to Hurricane, locust attack. PM Modi had said that hundreds of invaders attacked the country, but India emerged grand by this. At the same time, without naming China, PM Modi had said that those who raised their eyes towards India in Ladakh received a befitting reply. At the same time, in ‘Mann Ki Baat’, PM Modi said that the country has come out of lockdown during the crisis of Corona. Now we are in the era of unlocking. In this time of unlock, two things need attention. Defeat Corona and strengthen the economy and give it strength. Earlier, PM Modi has addressed the country 12 times on different issues.


On 31 December 2016, Narendra Modi addressed the nation for the second time. During this time he spoke on demonetisation and black money. He said that banks should work keeping in mind the poor and take appropriate decisions in public interest.

On 15 February 2019, the Prime Minister in his address spoke on the Pulwama attack that shook the country. He said in his address that I understand people’s feelings and their anger, we have given complete freedom to the security forces and we have full faith in the valor of our soldiers.

On 27 March 2019, PM Modi addressed the residents on the occasion of the success of Mission Shakti. During this time the PM had said that our scientists have killed a live satellite in the Earth’s lower orbit (LEO) 300 km away in space. This live satellite was a predetermined target, shot down by an anti-satellite missile. This expedition was successfully completed in three minutes.

After removing Article 370 from Jammu and Kashmir, PM Modi addressed the country at 8 pm on 8 August 2019. He said that the youth of Jammu and Kashmir were shown a beautiful dream of the state. Narendra Modi made promises to bring youth into the mainstream, as well as to get rid of corruption and to connect with employment.

Prime Minister Narendra Modi encouraged the scientists in his address on 7 September 2019 after Chandrayaan-2 lost contact before landing on the moon. PM addressed ISRO scientists and the country from ISRO Control Center. During this time the Prime Minister said that we will definitely succeed.

On 9 November 2019, when Prime Minister Modi came to address the country for the seventh time, he spoke on the Supreme Court verdict on the Ayodhya dispute and the Kartarpur Corridor in Punjab. In his address, he appealed to the people of the country to create a sense of peace, harmony and harmony.

On 19 March 2020, at 8 pm, PM Modi addressed the countrymen about the corona virus. He called for a public curfew on Sunday, urging people to cooperate. At the same time, he said that at 5 pm on March 22, for five minutes, give thanks by clapping all those who are engaged in the necessary work by taking the risk.

On 24 March, when Prime Minister Modi addressed the country, he sought some time from the countrymen to compete against Corona. In his address at eight o’clock in the night, he announced the lockdown of the entire country for 21 days.

During the Corona period, the Prime Minister addressed the countrymen for the third time on 3 April. During this time, he appealed to the people to light lamps on the roof or balcony by lighting the house lights for nine minutes on April 5 at 9 pm. He said that we will overcome the darkness of the corona by the power of light.

Gyawar Address: Lockdown extended until 3 May

Prime Minister Modi addressed the nation for the 11th time on 14 April. In this address, he extended the lockdown period to 3 May, stepping into the battle against Corona.

Prime Minister Modi addressed the nation for the 12th time on 12 May. In this address, PM Modi announced a big economic package of 20 lakh crore rupees to get the country out of the Corona crisis.