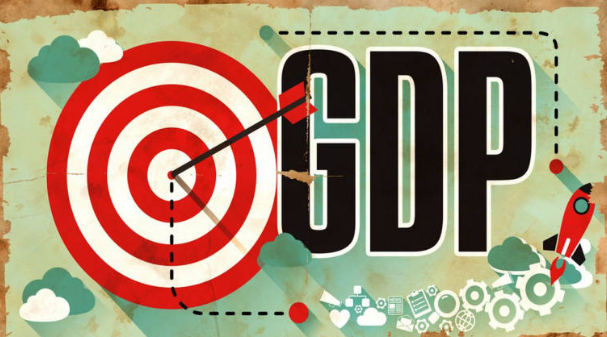 According to the brokerage, considering 10 days of lockdown in Q4FY20, GDP growth is likely to decelerate by 70bps from its earlier estimate of 4.5 percent YoY.

Like India, many other countries have also announced lockdown and social distancing measures to avoid the spread of COVID-19. This is putting pressure on the global economy and the stock markets.

Many brokerages are saying that the impact of such harsh measures will be felt more in FY21 as compared to Q4FY20. The government has announced a Rs 1.7-lakh crore stimulus package, and RBI has announced a slew of measures, including a rate cut of 75 bps, to mitigate the slowdown.


“We see pressure on 3Cs – Credit, Consumption, and Capex – in FY21. Full-year real GDP could grow at a paltry 2.5 percent as per our expectations today,” Ambit Capital said.

Except for government consumption expenditure, all other constituents of GDP are likely to witness a sharp deceleration in growth in FY21 with investment growth likely to contract at 5 percent YoY (a 30-year low) against 2 percent in FY20, creating a massive drag on the headline GDP growth, the brokerage reasoned.

Investments (which constitutes around 30 percent of GDP) as measured by Gross Fixed Capital Formation (GFCF) are likely to witness the sharpest fall in last 30 years as all three institutions namely (1) private corporate, (2) households and (3) Government is likely to pull back on capex meaningfully due to COVID-19, the brokerage feels.

According to the brokerage, considering 10 days of lockdown in Q4FY20, GDP growth is likely to decelerate by 70bps from its earlier estimate of 4.5 percent YoY (and as against 4.7 percent in Q3FY20).

“This will take overall GDP growth in FY20 to 4.8 percent YoY (from an earlier estimate of 5 percent of GDP). It is worth noting that the Government had revised the quarterly GDP growth of Q1FY20 and Q2FY20 by 60bps each to 5.6 percent and 5.1 percent YoY, respectively,” it said.

The brokerage further said the spread of COVID-19 and resultant lockdown will have disastrous consequences for discretionary consumption in India. 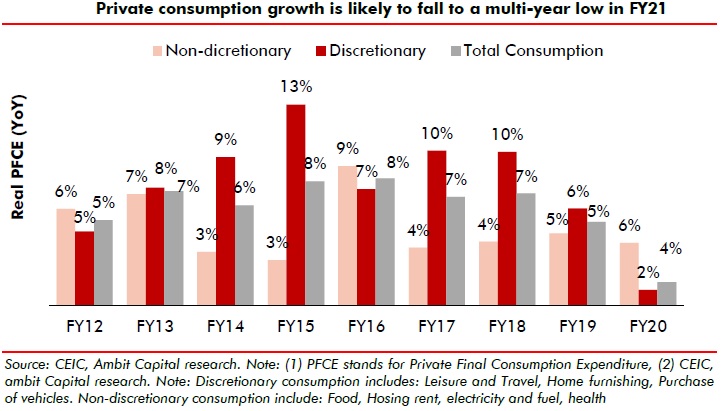 In the absence of corporate credit growth, retail credit has been the mainstay of bank credit growth in the past seven years.

Moreover, retail NPAs which have started rising recently could rise faster in the coming quarters due to slowdown in GDP growth and job losses, said the brokerage.

Exports (merchandise and services), which account for 20 percent of India’s GDP (around $540 billion), are expected to see a contraction in FY21 due to the expected slowdown in global growth.


“If the global GDP growth rate declines by 200bps in CY20 due to the COVID-19 spread, we estimate that total exports could decline by 11 percent in FY21 with services contracting by 10 percent and merchandise exports contracting by 12 percent,” Ambit said.

The brokerage feels the government consumption expenditure growth is expected to be the only saviour.

Over the past three years, government consumption expenditure (around 11 percent of GDP) has been the mainstay of GDP growth. In the wake of the COVID-19 crisis, the government has provided a relief package of Rs 1.7 lakh crore ($22 billion or 0.9 percent of India’s GDP) for the bottom of the pyramid population to tide over the present economic crisis arising due to the lockdown of the entire nation.

Ambit expects the government to also come up with a financial package to help corporates, especially small and medium enterprises.

“All this is likely to pull Government consumption expenditure in FY21 to 15 percent YoY (as against 10 percent YoY in FY20) and the steps taken by the government will likely save the GDP growth from stagnating in the coming fiscal,” Ambit said.

According to the brokerage house, the lower GDP growth is likely to hit corporate profitability hard.

With nominal GDP crashing to 5-decade low, the modelling process suggests that corporate profitability for the listed universe is set to decline by around 15 percent YoY in FY21, it feels.