Srinagar, Jeanan . Security forces in Jammu and Kashmir have foiled another plot of a major suicide attack like Pulwama. The army recovered an IED-equipped Santro car from Ayan Gund area of ​​Pulwama. Which was later safely destroyed by the bomb defunct squad. The weight of the IED mounted in the car was around 45 kg. The IED-equipped car was produced by members of the terror group Hizbul Mujahideen and Jaish-e-Mohammed.

In the preliminary investigation, the security forces have revealed the identity of the two terrorists involved in it. One of these is Adil, who works for both Jaish and Hizb. It is being told that he was driving this car. Pakistani terrorist Fauji Bhai was also in the car with him. He also works for Jaish. Not only this, the security forces have also detected the terrorist who prepared the IED. Security agencies say that this IED was prepared by Pakistani terrorist Waleed. A-class terrorist Waleed alias Musa alias Idlis has been active in the Valley since 2015.


Giving information about the incident, IGP Vijay Kumar said that this vehicle equipped with IED was designed by Hizbul Mujahideen and Jaish-e-Mohammad to target the security forces in Pulwama district of South Kashmir. The weight of the IED in this vehicle was at least 40 to 45 kg. The vigilance of security forces and timely steps have averted a major tragedy. He also said that security agencies — police, army and CRPF — had been receiving inputs about a possible suicide attack for the past several days.

He said that on Wednesday, we received firm information that the terrorists were pulling out the vehicle ready for attack. On the basis of information, special blocks were established in different areas of district Pulwama. The car in which the suicide bomber was sitting was stopped at two points, firing as a warning but escaped from there. However, the security forces were behind them. In Rajpora area of ​​Ayanagund, Pulwama, the terrorists left the vehicle late last night and escaped from there.


40 to 45 kg explosive material was found in the car: Security forces searching for terrorists got information about this car parked in the deserted place. The jawans surrounded the area and sent people around to safer places. Meanwhile, the bomb disposal squad was called. Upon examining the vehicle, the squad found that the car was loaded with at least 40 to 45 kg of explosive material. This included ammonium nitrate, RDX and other materials. It was not possible to move the car to another location, so it was decided to destroy it there itself. The squad exploded the car safely. During the blast, the car’s tests flew 50 meters above the ground. 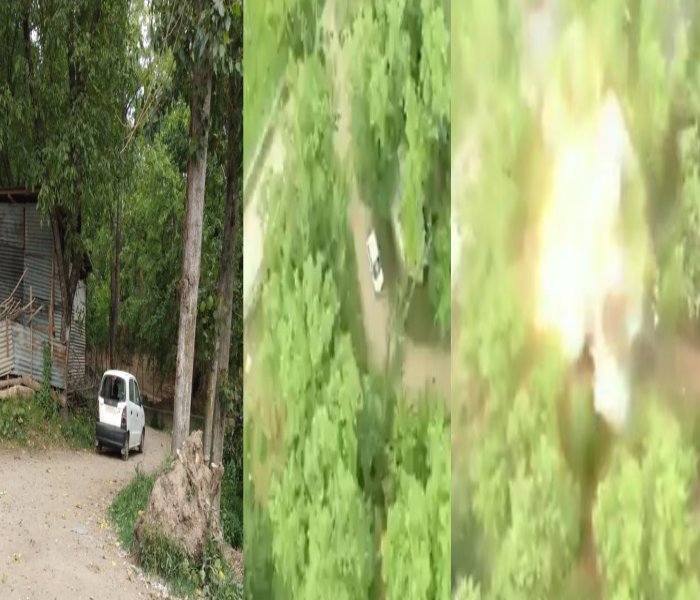 Identification of terrorist Adil: IGP told that security agencies have identified terrorist Adil. Adil works for Hizbul Mujahideen and Jaish-e-Mohammed. It is being told that this car was driving there. He was also accompanied by another terrorist named Fauji Bhai, who is Pakistani and belongs to Hizb. Apart from this, the name of Pakistani terrorist Waleed is coming in the IED ready. This A-class terrorist, Walid alias Musa alias Idlis, has been active in the Valley since 2015. In fact, he had prepared this vehicle for a suicide attack on Jang-e-Badr on the 17th day of Ramadan month but due to the security forces he could not carry out the attack on that day.


Military Kanwai was to be targeted:  It is believed that this car was to be used to carry out another terrorist conspiracy like 2019 in Pulwama, but it was deferred due to the vigilance of the security forces. If sources are to be believed, the terrorists were informed that a contingent valley is coming from Jammu within a couple of days. The army consists of 20 to 25 vehicles and also has close to 400 personnel. In order to carry out the crime, the terrorists had gone out to take the vehicle to the hideout. But before reaching the end, he had to leave the vehicle and escape from there.

The license plate number: the Kathua  in which the vehicle is found IED, has written Kathua number along the fake number plates on it. The car has a plate number JK-08B 1426, which is Kathua’s number. This register number is for Hero Glamor motorcycle. The Hiranagar police has seized the motorcycle, while its owner is also being questioned. Hiranagar area of ​​Kathua district of Jammu division is a frontier area and the Hiranagar area here is considered very sensitive to Pakistani infiltration. In such a situation, suspicion of a Pakistani conspiracy behind the explosives being found in this car is also being raised.

#WATCH J&K: In-situ explosion of the vehicle, which was carrying IED, by Police in Pulwama.

Major incident of vehicle-borne IED explosion was averted by Police, CRPF & Army after Pulwama Police got credible info last night that a terrorist was moving with an explosive-laden car pic.twitter.com/UnUHSYB07C 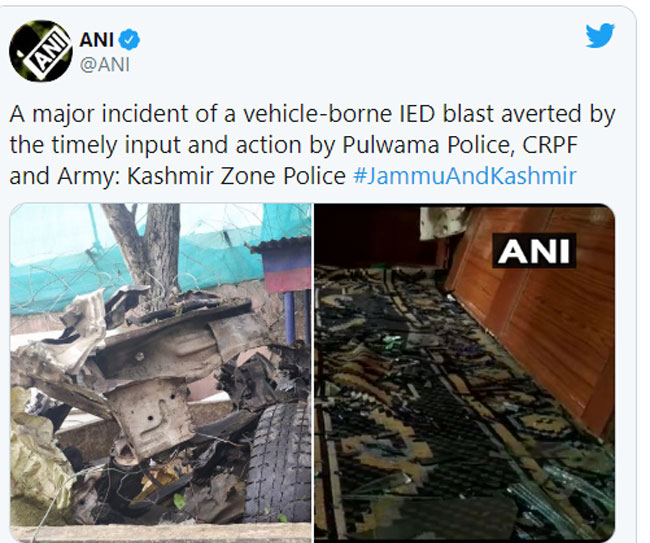 On 14 February 2019 last year, a similar car was used to attack CRPF convoy in Pulwama. The CRPF convoy was attacked by a vehicle loaded with explosives. 40 soldiers of the country were killed in this attack. The Jaish-e-Mohammed militants had hit a car full of IEDs with an army convoy.