Patna, JNN. RJD Goplaganj March: Rashtriya Janata Dal (RJD) leader Tejashwi Yadav demanding arrest of Gopalganj Triple Murder accused Janta Dal United (JDU) MLA Amrendra Pandey aka Pappu Pandey Gopalganj, accompanied by party MLAs and legislators, left for the march, but the police-administration barred him from traveling during the lockdown. During this high voltage drama, when the lockdown strips were seen flying, politics also got hot. Bhola Yadav, who is considered to be ‘Hanuman’ of RJD supremo Lalu Prasad, has alleged that Nitish Kumar’s government wants RJD’s people to become corona, so the Korana-infected Bihar Military Police (BMP) was deployed to stop them.

Tejashwi and Rabri left the house, the police stopped


It is to be known that on Sunday, criminals killed their parents and brother by firing indiscriminately at RJD leader JP Yadav’s house in Gopalganj. Whereas, JP Yadav was also injured in the incident. The injured RJD leader has lodged an FIR against JDU MLA Amarendra Pandey of Kuchaykot. Tejashwi Yadav has announced a Gopalganj march from Patna in the absence of the arrested MLA. For this March, the entire convoy, including Rabri Devi and Tej Pratap Yadav, who left the house with Tejashwi, was stopped by the police near Rabri Devi’s residence.

Lockdown stripped while stopping the convoy


Lockdown strips were seen flying while stopping the convoy. RJD leaders and workers were not seen to maintain physical distance with each other. The police also showed the same condition. Many RJD workers were seen on the road without a mask. In such a big question, if someone got corona infection, who would be responsible for it? 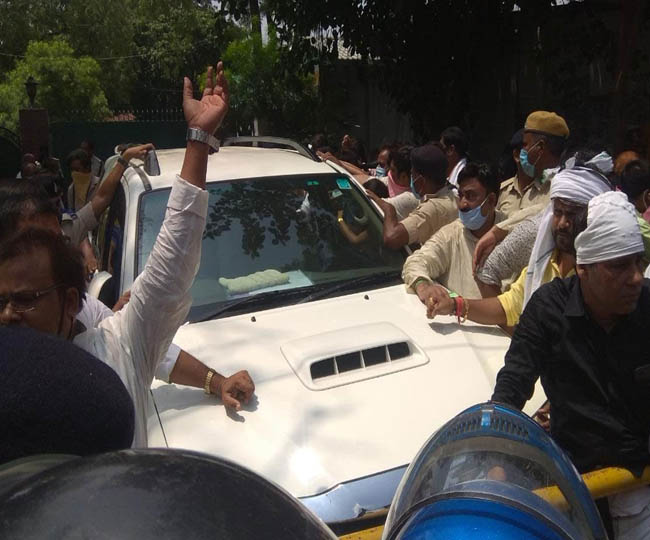 Bhola Yadav is considered close to RJD supremo Lalu Prasad Yadav. He is also a confidant of other members of the Lalu family. He is also known by the nickname of ‘Lalu’s Hanuman’.