Srinagar, State Bureau. Police have found out the owner of the car full of explosives. He is a Hizb terrorist Hidayatullah Malik of three lakh. At the moment, his targets are constantly being pressed to catch him. Pulwama police today also called the police station for interrogation of the family of Hidayatullah. So far, the police has not given any information in this regard. But it has come to light that Hidayatullah is being searched with full enthusiasm and family members are being asked to help in this.

It is worth noting that Jaish and Hizb terrorists had once again conspired to carry out a major suicide attack in South Kashmir like 14 February 2019. Police recovered the car used in the plot on Wednesday night after it was safely destroyed last Thursday morning.


Confirming the car owner, police sources said that the car which was planned to be used for making bombs belonged to a Hizbul Mujahideen terrorist. The name of this terrorist is Hidayatullah Malik and he is a resident of Sharadpora village in district Shopian. Meanwhile, another police officer said that Hidayatullah Malik became a terrorist on 30 July 2019. He was listed in the C category terrorists earlier this year. It has a reward of three lakhs.

Conspiracy like Pulwama attack  failed: Security forces averted a major disaster by thwarting the terrorists’ plot to repeat the Pulwama incident. The Hizbul Mujahideen had planned to attack a large military establishment in Pulwama or a convoy of security forces on the Jammu-Srinagar highway with a centro car equipped with 45 kg of explosives, but the security forces safely detonated a car bomb in Rajpora (Pulwama) blew off. The Hijbul terrorist Adil was driving this explosive-laden car, which escaped from the spot.

Director General of Police Dilbag Singh said that the plot of attack was hatched by Jaish, Lashkar and Hizbul. In the car, the IED was fitted with a prize money of Rs 7 lakh by Jaish terrorist Musa alias Waleed alias Idris along with another Jash commander Fauji Bhai. Pakistan’s Waleed is said to be active in Kashmir since May 2015. Fauji Bhai, active since 2017, has a reward of five lakhs. The number plate JK08B-1426 on the car is of the motorcycle of BSF personnel from Kathua. BSF personnel have also been interrogated.

NIA team investigated:  NIA has also reviewed the blast site in Rajpora. The investigation of this case can also be entrusted to the NIA. The wires of this car bomb and the Pulwama attack last year seem to be found together. Apart from RDX, ammonium nitrate, nitrate glycerin and sulfur have also been used in IEDs.


Militants wanted to attack in Ramadan:  IGP Kashmir Vijay Kumar told that Jaish terrorists Waleed and Fauji prepared a car bomb to attack security forces on the day of Jang-e-Badr, the 17th day of the month of Pak Ramadan on May 11. Was. He could not attack that day due to the security forces guarding him. After this, together with Hizbul, he plotted the attack afresh. The Hizbul terrorist Adil was chosen for this. On Wednesday, Adil was trying to replace a car laden with explosives. 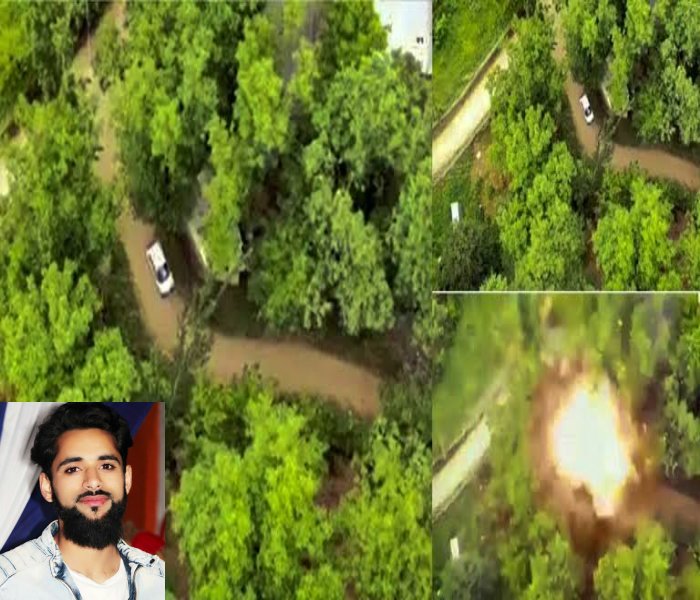 There was information about a big terrorist attack: Police had received information that the terrorists were about to execute a major attack in Pulwama. After this, the police increased the vigil in Pulwama with CRPF and Army’s 44 RR personnel at 5:30 pm on Wednesday. At around 10:30 pm, security forces at the block in Rajpora area of ​​Pulwama indicated a white colored Centro car to stop, but the driver swiftly pulled the car away. The Naka Party informed the other Naka Party about this. Soldiers near Ayanagund signaled the car to stop. Seeing the barrier, the driver attempted to turn the car onto a narrow road. The soldiers fired on this and a tire of the car was punctured. The terrorist continued to drive the car, but did not succeed and escaped in the dark, firing at the soldiers. The Naka party took over the car. A search for the driver Adil was then started, but no clue was found.


40 jawans killed in Pulwama attack: On  14 February 2019, a CRPF convoy was also attacked in Littar, Pulwama, in which a terrorist hit an IED-equipped vehicle in the vehicle of security forces. 40 CRPF personnel were killed in this attack. This was averted by the Indian Vasusena, who entered Pakistan on 26 February 2019 and destroyed the Jaish terrorist bases in Balakot by bombing them.

Reliance Jio Launch New Plan: Quickly pick up the cheapest plan, you will get many benefits

Employee Pension Scheme: Great news for employees, pension amount will increase! You will get Rs 8,571, know how here