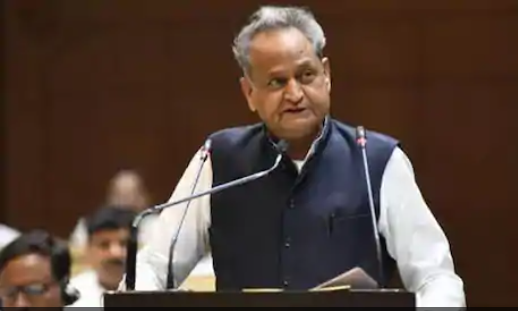 Two dozen Congress MLAs have alleged that the Bharatiya Janata Party (BJP) is plotting to topple the Ashok Gehlot government of the state. These Congress MLAs have made this allegation in a joint statement issued late on Friday night.

Jaipur: Amid political upheaval in Rajasthan, CM Ashok Gehlot has made a big charge on the BJP. Ashok Gehlot on Saturday accused the BJP of conspiring to topple the Congress government and said that the opposition party was offering up to Rs 15 crore to Congress MLAs. Gehlot said that during the Coronavirus Pandemic, where the government is working for the people. At the same time, the BJP is creating problems for the elected government and people of the state. BJP is constantly trying to topple our government.


What did Gehlot say
Gehlot said that in Karnataka and Madhya Pradesh, BJP has brought down our governments through horse trading. He said, in this episode, BJP has given Rs 15 crore and some other kind of temptation to some of our MLAs and this is happening continuously. Gehlot said that the BJP had also bought and sold MLAs in Gujarat for the Rajya Sabha elections. And now he is doing something similar in Rajasthan.

Explain that in Rajasthan, the Congress has 107 seats out of 200 seats. At the same time, the Congress government also has the support of 12 independent MLAs.

Earlier, two dozen Congress MLAs alleged that the Bharatiya Janata Party (BJP) was plotting to topple the state’s Ashok Gehlot government. These Congress MLAs have made this allegation in a joint statement issued late on Friday night. This statement has been issued by the signatures of the Chief Whip in the Assembly, Dr. Mahesh Joshi and Deputy Chief Whip Mahendra Chaudhary.

‘Top people of BJP involved in this conspiracy’
Congress MLAs have alleged in a joint statement that the BJP is plotting to topple the state government’s Congress government through horse trading and other corrupt tactics. These MLAs have termed it the alleged ‘undemocratic and corrupt conduct’ of the BJP. The statement said, “We have clear information that the top people of the BJP are involved in this conspiracy which is from Congress MLAs and supported MLAs and others. Contacting them, they are trying to mislead them by giving them various kinds of temptation.

24 MLAs are named in the statement
The joint statement named 24 MLAs, including Lakhan Singh, Jogendra Singh Awana, Mukesh Bhakar, Indra Meena, Ved Prakash Solanki and Sandeep Yadav. It is worth mentioning that this statement has been issued at a time when Special Task Force of Rajasthan Police has registered a case on Friday on charges of horse trading in the state and destabilizing the elected government.