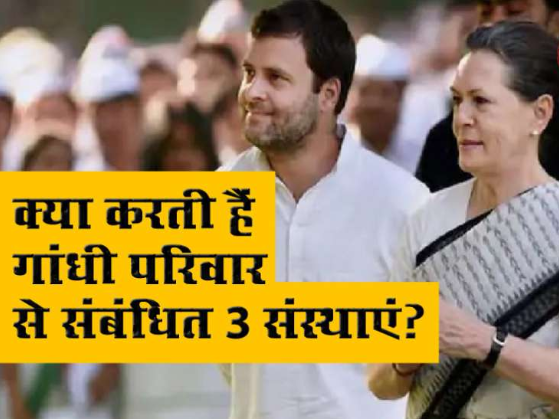 new Delhi. The Government of India has formed a committee to investigate three organizations of the Congress Party. Three ministers of the Gandhi family of the Congress Party will be examined in this ministerial committee set up by the Ministry of Home Affairs. The organizations that this committee is going to investigate are Rajiv Gandhi Foundation (RGF), Rajiv Gandhi Charitable Trust (RGCT) and Indira Gandhi Memorial Trust (IGMT).


Why is the investigation taking place?

The three trusts run by the family of Congress President Sonia Gandhi have been accused of violating the provisions of the Money Laundering Act and several other laws. The government is being investigated by different agencies and different departments against these trusts. The Special Director of Enforcement Directorate (ED) has been made the chairman of this inquiry committee. The government has not explained these allegations in detail, but several big leaders of the ruling BJP have made many allegations on the Rajiv Gandhi Foundation.

What do these three organizations do?

The purpose of this institution is to help the underprivileged and under-privileged citizens of the country. For this, the organization works to increase the opportunities for such people by carrying out several campaigns like literacy program. Last month, the BJP raised questions on this and alleged that this institution takes money from China. However, it was denied by the Congress leaders. Let us tell you that in August 1991, there was also the establishment of a Rajiv Gandhi Institute for Contemporary Studies (RGICS) ideation forum, which was to conduct research and issue a white paper on issues of governance and public policy.

Talking about Rajiv Gandhi Charitable Trust, it was formed in 2002 during the tenure of BJP. These trusts also work in the field of social reform, but for some time the trust has been focused on the Rajiv Gandhi Women Development Project and Indira Gandhi Eye Hospital and Research Cent programs in Uttar Pradesh and Haryana. Sonia Gandhi is also the chairman of this trust. Rahul Gandhi is one of the trustees.

The Rajiv Gandhi Charitable Trust is a completely non-profit organization. Deep Joshi, an expert in development, who won the Roman Magasse Award in 2009 and Padma Shri in 2010, is the CEO of the trust. Apart from this, the trust has also opened Indira Gandhi Eye Hospital and Research Center in the year 2006. At present, there are four such eye hospitals in the country, two in Gurugram, one in Amethi and one in Lucknow.

The Indira Gandhi Memorial Trust was established in 1985 during the Congress term after the assassination of former Prime Minister Indira Gandhi in 1984. This trust
serves to publicize the ideals of former PM Indira Gandhi’s life as well as preserve her memories. Through this trust, the Congress party does all the social work, from conducting research on the ideas of Nehru-Gandhi.

In addition, every year the Indira Gandhi Memorial Trust holds a photo exhibition of the former Prime Minister Indira Gandhi. This trust works specifically for the field of education. It first opened the Indira Gandhi College of Arts and Science in Kotamangalam, Kerala and also established B.Ed., Dental, and Engineering College. KM Parith, a Kerala businessman and local leader, is the chairman of the trust.