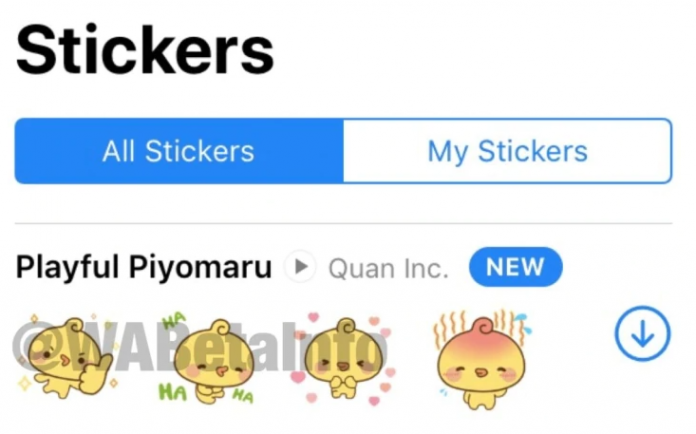 The animated stickers come as an extension to one of the most-used features, stickers on the WhatsApp platform.

WhatsApp will soon add animated stickers on its Android and iOS apps. The animated stickers are now available on the beta versions of WhatsApp for Android and iOS, according to WABetaInfo. The first official sticker pack that WhatsApp has rolled out is called Playful Piyomaru, which is available to download in the sticker store. In addition, WhatsApp allows third-party animated stickers to be downloaded and installed in the app. However, there remain to be some final touches WhatsApp may make before the rollout on the stable versions.


According to WABetaInfo, WhatsApp beta for Android version 2.20.195.1 and the beta for iOS version 2.20.70.26 now show support for animated stickers, which are already supported on Facebook’s other properties including Messenger and its marquee app on both mobile platforms. Animated stickers can be accessed in three ways – by receiving one and saving it to use further, by installing third-party animated stickers and using them, and downloading the official ones from WhatsApp’s sticker store.

All three ways to access animated stickers are now available on both the beta builds of WhatsApp. This means people who registered themselves to test the early versions of WhatsApp before they are made available to a wide audience will be able to use the new features. Normally, WhatsApp rolls out new features to the beta versions before it finalises them for the stable builds on both Android and iOS platforms. The first step towards making animated stickers ubiquitous on the app is the release of WhatsApp’s official stickers in the store.

Moreover, WABetaInfo has noted that while the new animated stickers make movements to become lively, they do not do that in a loop. If you use animated stickers on other platforms, they play in a loop either automatically or with a toggle. Right now, WhatsApp has none of these functionalities. Maybe the Facebook-owned company adds support for loop in the stable version. But until then, there is no information on what WhatsApp will do about this gripe.

The WhatsApp animated stickers are expected to roll out soon for the stable version on both Android and iOS platforms. Until then, you can use the regular stickers on the chat app, either by downloading them from the official store, or by importing them from third parties, or even creating your own with the help of sticker creating apps.