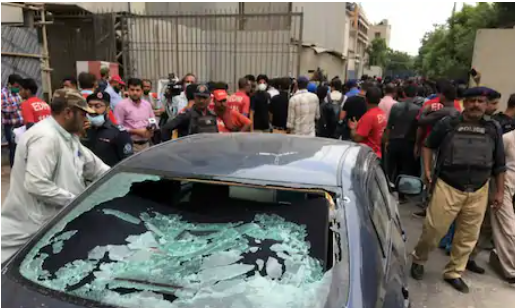 On the Karachi Stock Exchange, terrorists attacked with grenades and fired. The four terrorists who carried out the attack have been killed, while those killed include a police inspector and four security guards.

Islamabad On the Karachi Stock Exchange of Pakistan, terrorists attacked with a grenade and fired. The four terrorists who carried out the attack have been killed, while those killed include a police inspector and four security guards. 6 people have been injured in this incident. According to the information received, the terrorists wanted to take over the stock exchange. According to Pakistani media, the Baloch Liberation Army (BLA) has claimed responsibility for the attack. A photo of three terrorists is also being shared in some tweets on social media. It is claimed that these terrorists were involved in the attack.

According to Don, at around 9 am, these terrorists tried to go inside the gate of the stock exchange and started firing bullets. To enter in, he also did a blast for the grenade at the gate itself. In the grip of this grenade, 2 ordinary citizens have died on the spot. Police said that 3 terrorists were killed at the gate itself, while one terrorist was killed after entering the premises. About six injured have been admitted to Civil Hospital Karachi.


According to the information, there is no deployment of police in Karachi Stock Exchange. The security of the security here is with the private company. According to the report of Geo News Channel, the intelligence department had received strong news a few days ago that terrorists could carry out any major attack in Karachi.


Sindh Governor Emraan Ismail said in a tweet that we have instructed security agencies that more and more terrorists have to be caught alive so that their masters can be punished in such a way that they become an example for other terrorists too. We will protect Sindh at all costs.

Pakistani Rangers and Sindh police personnel arrived after getting information about the attack Has been done. The rear gate was used to drive people out. Currently, search operation is going on in the stock exchange building. Security forces have also sealed the area around the building. Sleepers have also been deployed on nearby buildings. Weapons and ammunition have been recovered from the slain militants