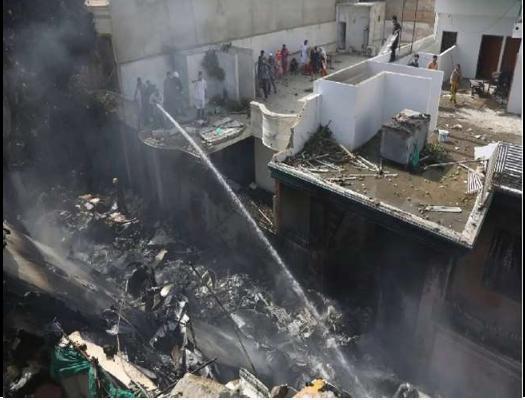 Islamabad, PTI Last month, Pakistan International Airlines (PIA) plane crash was caused by the negligence of the cockpit crew and the air control tower, not due to any technical fault. This was revealed in the preliminary investigation report of the accident. In this accident 97 people aboard the ship were killed. The Airbus A320 aircraft going from Lahore to Karachi crashed in a residential area near Jinnah International Airport in Karachi on 22 May before landing. In addition to 91 passengers on the plane, 8 crew members were on board.

The investigation was initiated by the government with the commitment that the preliminary report be shared with Parliament on 22 June, but Aviation Minister Ghulam Sarwar Khan submitted the report to Prime Minister Imran Khan instead of Parliament. According to officials, the report revealed that the pilot and air traffic control officials were primarily responsible for this. The Express Tribune reported that preliminary investigations have revealed that CAA officials, cockpit crew, control towers and air traffic repeatedly made mistakes. It reported that the aircraft’s black box has not yet indicated the possibility of any technical malfunction.


Both speed and altitude of the aircraft were high


The pilot also did not report the landing gear jammed to the control tower. It was also a wrong decision for the pilot to attempt a second landing. The aircraft remained in the air for 17 minutes after the first landing attempt, during which both aircraft engines failed. It also stated that pieces of the engine of the PIA’s aircraft stayed on the runway for 12 hours, but the air site unit did not remove them and other aircraft were later allowed to land on the runway. This was a violation of standard operating procedure as it could cause damage to other aircraft.