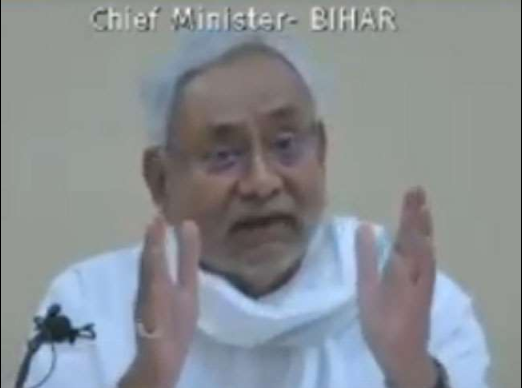 Patna, JNN. Seeing the condition of corona infection in Bihar, Chief Minister Nitish Kumar addressed the people of the state through video conferencing on Wednesday. During this, he made the public aware of the work being done by the government during the Corona transition. Also informed about further plans. He told that further studies will start in the schools and colleges of the state. Also, the government will give employment to all the people returned from outside.

Bihar government is serious since the days of discussion

In his message, the Chief Minister said that since the days of discussion on the corona infection in Bihar, the state government is in serious sight. The first meeting was held on 13 March. The Assembly was adjourned on 16 March. Then the public curfew was imposed. Further lockdown was implemented across the country from 25 March.

Review at every level, saw everything


The Chief Minister said that he has reviewed the situation at every level. Have seen every single thing myself. Saw the Quarantine Center myself and talked to the people there. The government is serious about this epidemic.

The Chief Minister said that people were made aware during the lockdown. This awareness has to be maintained even further.

Alert to the people who are careless

On getting the lockdown exemption, alerting the people forgetting the physical distancing, they misunderstood it. Said to keep a distance of six feet between each other. Stay at home Do apply mask on exit. Follow the provisions of physical distancing and lockdown. He advised people not to hide the disease. Said to inform the hospital about the deteriorating health. Take special care of the elderly and children.

No more mask problem as before

The Chief Minister said that earlier there was a problem of mask but now it is not so. The mask has been produced through livelihood. Masks are also being built at the Quarantine Center.

He appreciated the cooperation of the people from village to village in the war against Corona. Also asked to take special care of elders and children. Told that all are being investigated like pulse polio campaign in the state. In this also, public opinion is necessary.


Also read: HDFC Bank, Axis Bank gave option to not give EMI till August, you can apply this way

They will give employment to those who have returned from outside

The Chief Minister said that three thousand people have been found among those who returned from outside after May 3. He asked that if a man from one country goes to another place in the country, why is he called a migrant? The work of providing employment to such returned people is going on in Bihar. The government will provide employment to all the people from outside in Bihar. It also said that most people from outside have come in the state, hence the quarantine centers will be closed now. 5300 rupees was spent on every person kept in a quarantine center.

Said: Several measures taken for relief in the state

Referring to the relief measures taken in the state, he said that the government gave one thousand rupees from the Chief Minister Relief Fund to the trapped people. Ration was given to 1.62 crore people in the state. An amount of 3261 crores was given to the people in their accounts. 85 lakh pensioners were assisted. They gave five hundred rupees to every person coming from outside. Not only this, he also formed the Corona Eradication Fund.

The Chief Minister said that the government has always helped the disaster affected people. The corona epidemic is also a disaster. Whatever calamities are affected, they have the first authority over the treasury of the government. More than 500 disaster relief centers were run across the state.

Public awareness given in fighting epidemic


Giving information about the state of infection in the state, he emphasized on public awareness. Told that people will be made aware through posters and communication channels. At the local level, the people’s representatives will also make people aware. His role in this is very important.