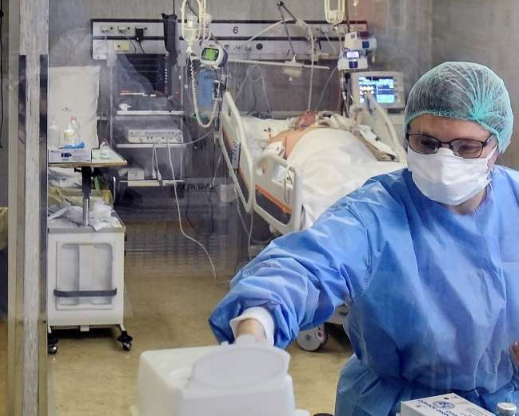 Washington, agencies. The corona epidemic, which has spread across the world, does not seem to be decreasing at the moment. The global figure of people infected with this dangerous virus has crossed the 51 lakh level. So far, over three lakh 32 thousand victims have died due to Corona. America is the most affected by this epidemic in the world. There are more than 16 lakh 4 thousand cases in this most powerful country of the world. After America, Russia, Brazil, Spain, Britain and Italy are also moaning in the havoc of Corona. In the last 24 hours, about 20 thousand new cases were found in Brazil. While Spain has cleared the way to extend the period of lockdown imposed by Corona to June 7. Parliament has been approved on this proposal.

Number of infected is more in US, Russia and Brazil


According to John Hopkins University of America, the global figure of corona victims has exceeded 51 lakh 13 thousand on Thursday morning. The United States is followed by Russia and Brazil in cases of infected people. In Russia, more than three lakh 17 thousand people have been found positive in the corona test. There are over 96,000 cases in Brazil. Cases are increasing rapidly in these two countries. In Spain, Britain and Italy, more than two million people suffer from Corona. While the highest number of deaths from corona in Europe occurred in Britain. More than 35 thousand lives have been lost in this country. The first case of the virus was reported in December in Wuhan, China. From here it spread all over the world. The Corona infection was declared an epidemic by the World Health Organization (WHO) on 11 March.

Also Read: Corona’s slow pace in India compared to other countries, 0.2 deaths per 100,000 population on average


Over ten thousand health workers were also infected in Iran battling the Corona epidemic. More than 100 health workers have also died so far. Iran’s Ministry of Health said on Thursday that the number of people who died in the country during the last 24 hours from the death of 66 more victims has reached 7,245. During this period, 2,392 new cases have been found.

Nearly nine million tests were conducted in a day in Wuhan city, the epicenter of the Corona epidemic in China. About eight and a half million tests were done a day earlier. In view of the repeated threat of Corona, the whole of Wuhan with a population of 1.1 crore is being tested. Meanwhile, China’s National Health Commission reported that 33 new cases were found in the country. Of these, 31 are non-symptomatic cases. Such cases are increasing rapidly in China.

More than 91 thousand cases in Africa

Corona victims have also reached 91 thousand 598 in the African continent. 2,912 victims have died. South Africa has the highest number of 17 thousand 200 cases in the 55-member African Union. In Egypt, 13 thousand 484 people are infected. While Algeria and Morocco have more than seven thousand cases.

Where is the situation

In Singapore, the number of corona victims in 448 new cases has increased to 29 thousand 812

-People should wear face masks for prevention of pandemic in Canada

– Corona victims increase to 444 with 17 new cases in Nepal