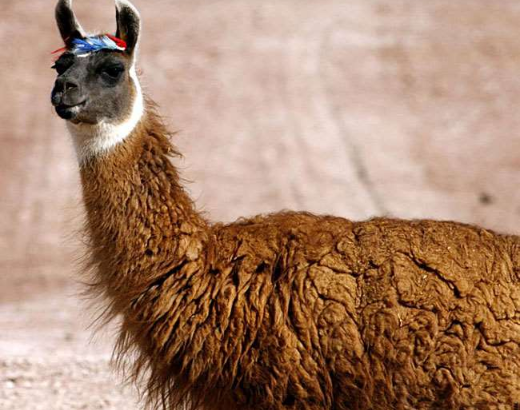 new Delhi. At present, the whole world is busy in the quest for prevention and cure from the corona epidemic. In the same sequence, a research article published in the journal ‘SAIL’ last week has raised hope. It states that antibodies to the blood of an animal ‘llama’ found in South America can protect people from the corona virus. Accordingly, lama’s antibodies are so small that it can penetrate into the vacant spaces of viral proteins. These antibodies, smaller than human antibodies, can thus help protect against danger.

Expecting why it is tied: International researchers have done this study on Belgium’s four-year-old lama ‘Winter’. Its antibodies have been shown to be effective in fighting diseases such as SARS and Mars. For this reason researchers are speculating that these antibodies may also work against Kovid-19. At least these have been effective in cell culture. Researchers are now working on a clinical trial in this regard. Dr. Xavier Sellens, a gynecologist and study author at Ghent University, says that “if it works, the lama is worth building a winter statue.”

Special type antibodies: Researchers say that two copies of specific types of antibodies in the llama form a new antibody, which may bind strongly to the major protein of SARS corona virus-2. It has been found that antibodies to the ‘Winter Lama’ bind to the proteins of the corona virus and inactivate it. Meaning these antibodies, also known as ‘nanobodies’, can also be helpful in the fight against Kovid-19, which has caused havoc around the world.

Potential treatment with antibodies: Scientists have also studied the potential of the lama and its antibodies in the possible treatment of diseases like SARS and Mars in the past years. Camelid animals such as lamas, camels and alpacs produce two types of antibodies. One of these is ‘single-domain’ antibodies and one resembles human antibodies. Single-domain antibodies are less than half the size, and perhaps this specificity produces an effective therapeutic potential.
Also Read: Whatsapp Pay’ Soon To Hit Your Smartphones
How has the research done: The four-year-old Lama ‘Winter’ was also studied in 2016 by researchers on SARS Corona Virus-1 and Mars Corona Virus. At that time Winter was injected with spike proteins of the virus over the course of six weeks. Antibodies were then isolated by taking a blood sample, each of which was associated with a spike protein. The cell culture showed that the antibody showed a tendency to inhibit the spike protein of SARS corona virus-1.

In the current study, the team created a new antibody. Two copies of Lama’s antibodies have been added to it, which is effective against SARS. In previous research, Winter’s antibodies kept SARS-corona virus-1 and mars-corona virus inactive for more than six weeks. Fortunately, antibodies extracted from winter four years ago have also prevented SARS-Corona virus-1. This virus has spread the epidemic of Kovid-19 worldwide.


Here’s how to know this Lama: Lama is a camilid animal found in South America. But this ruminant animal is smaller than a camel and does not grow. It has been reared as a domesticated animal even before prehistoric times and caters to their burdens, wool and meat requirements. Full-grown lamas range in height from 1.7 m (5.5 ft) to 1.8 m (6 ft).