Staring at a slump in rural demand and a slowdown in the rural economy, the Centre plans to inject more money into the UPA’s flagship Mahatma Gandhi National Rural Employment Guarantee Act (MGNREGA) scheme by linking wages under the Act to an updated inflation index, which will be revised annually. It hopes this will increase wages, thus increasing purchasing power and reviving rural demand.

However, some economists question whether linking wage rates to a better inflation index will be sufficient, given that MGNREGA workers get paid much lower than market rates.

The national average wage of an MGNREGA worker is ₹178.44 per day, less than half of the ₹375 per day minimum wage recommended by a Labour Ministry panel earlier this year.

In the first week of September, the Ministry of Statistics and Programme Implementation and the Labour Bureau informed the Rural Development Ministry that they had begun work to update the consumer price indices for rural areas (CPI-R) and agricultural labourers (CPI-AL) respectively.

“This has been a long-pending demand, but the case may be stronger now…This is one of the demand-side interventions that the government is carrying out in light of the current scenario in the rural economy,” said a senior official of the Rural Development Ministry, referencing the current slowdown.

“The consumption basket of CPI-AL [which determines MGNREGA wage revisions] has not been updated for more than three decades, and rural consumption patterns have changed drastically in that time,” said the official. Food items make up more than two-thirds of the CPI-AL consumption basket, but rural workers today spend a much smaller percentage of their money on subsidised food, and an increasingly larger amount on health, education and transport costs.

“They have now agreed to update the indices annually. MGNREGA wages will be linked to whichever index is higher in a particular State,” said the official, estimating that the increased wages based on updated inflation indices may result in 10% higher government expenditure on the scheme. 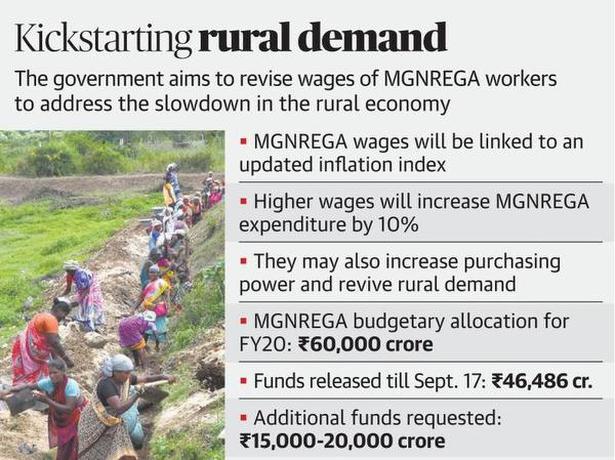 Wage rate revisions are usually notified at the beginning of a financial year, but the Ministry is trying implement the hike during the current year itself, as part of a stimulus package to counter the ongoing slowdown.

“If transferring expenditure [via MGNREGA] is done, rural wages could increase and that could percolate down into more purchasing power in the hands of the consumer,” said Soumya Kanti Ghosh, chief economic advisor for the State Bank of India.

However, some economists questioned whether the move is sufficient to revive demand.

“Of course, any increase in wages is welcome. But the base rate itself is so low for MGNREGA, so it may not be enough to link it to inflation now,” said Dipa Sinha, an economist teaching at Ambedkar University.

According to the latest Periodic Labour Force Survey, market wages for men were higher than MGNREGA wages by 74% in 2017-18, while for women, it was a 21% gap. “They must first increase the wages and subsequently ensure better inflation indexation. Otherwise, the impact will be minimal,” said Dr. Sinha.

Even with existing wages, the scheme is running out of funds due to increased demand for work. MGNREGA received a budgetary allocation of ₹60,000 crore, of which more than 75% has already been released by the Centre even before the halfway point of the year. Last week, the RD Ministry asked the Finance Ministry for an additional supplementary grant of ₹15,000-₹20,000 crore.

Droughts and floods in several States have led to an increased demand for work in the early part of the year, and the economic slowdown could spur demand again once the rabi planting season is over.