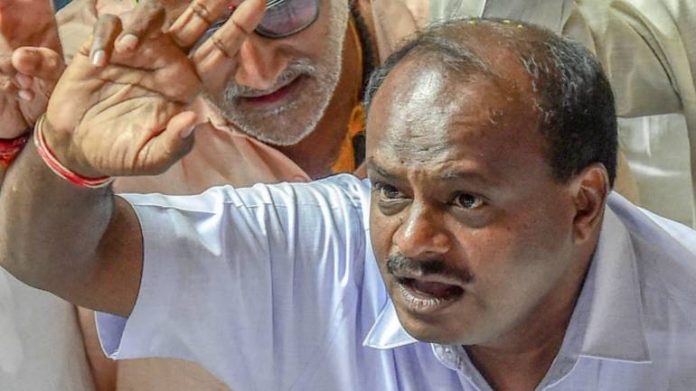 The chief minister said Modi came to power as he lured voters with his oratory skills and claimed the prime minister failed to fulfill any of his promises.

Karnataka Chief Minister H D Kumaraswamy on April 17 hit out at Prime Minister Narendra Modi questioning his contribution to the country over the last five years.

Kumaraswamy appealed to the people to realise that the country was never insecure.

The chief minister said Modi came to power as he lured voters with his oratory skills and claimed the prime minister failed to fulfill any of his promises.

“You have to think what Narendra Modi has given to the nation. Did he provide any relief to the farmers? Did women get any security? Did he provide jobs to the unemployed youth? Which problem could he sort out?” the chief minister asked the gathering.

Shivamogga is among the 14 Lok Sabha constituencies that will go to the polls during the second phase on April 23.

The first phase of polling, covering 14 other seats in the State, will take place on April 18. Karnataka has 28 Lok Sabha constituencies. Madhu Bangarappa is the son of former Karnataka chief minister S Bangarappa.
He is in a direct fight with BJP candidate B Y Raghavendra, son of BJP state president B S Yeddyurappa.