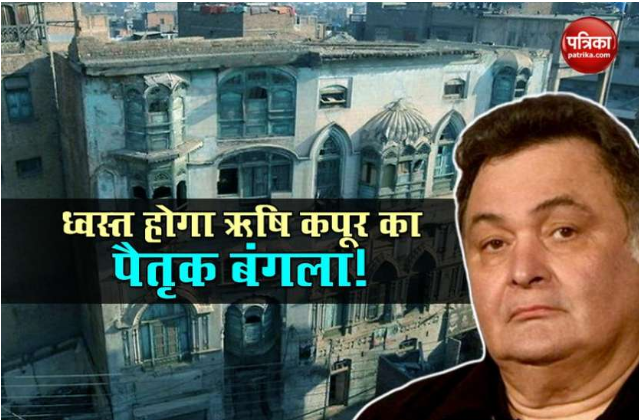 Peshawar The ancestral bungalow of the late Bollywood actor Rishi Kapoor in Peshawar (Peshwar), Pakistan can be demolished at any time. Actually, the current owner of the bungalow wants to build a commercial complex there. He has made similar efforts three or four times in the past, though the success was not achieved.


Earlier, on the request of Rishi Kapoor, the Government of Pakistan decided in 2018 to convert Kapoor Haveli, located in Kissa Khawani Bazaar, Peshawar, into a museum. Pakistani Foreign Minister Shah Mehmood Qureshi also promised Rishi Kapoor that the Pakistan government would convert the bungalow into a museum.


Let us tell you that the government of Khyber Pakhtunkhwa Province wants to preserve this mansion for tourists, given the historical significance of this mansion. So the government wants to buy this mansion. On the other hand, Haji Mahmud Israr wants to demolish it and build a commercial building in its place and he has made such efforts three or four times in the past.

Significantly, this mansion was built by Basheshwanath Kapoor, father of Bollywood actor Prithviraj Kapoor. But when the country was partitioned in 1947, they all came to India. Rishi Kapoor went to his ancestral residence in Peshawar in 1990. It was in this mansion that Rishi Kapoor’s grandfather Prithviraj and father Raj Kapoor were born.