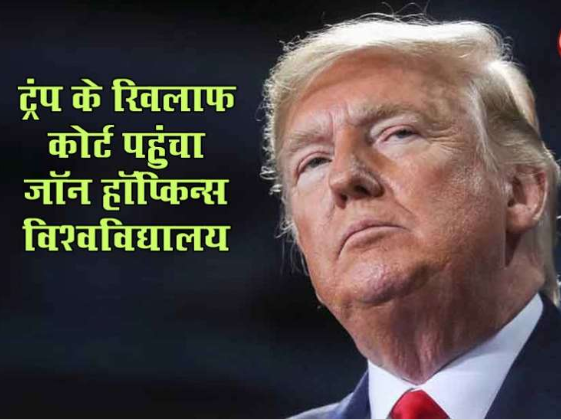 Washington US President Donald Trump has been in the news many times for his decisions and statements. Now even during the period of Corona transition, the decisions being taken by the Trump government have started to question the decisions one after the other. Out of these, there is a decision to cancel the Foreign Students Visa, on which a lot of controversy started.


In fact, President Donald Trump has decided to revoke the Visa for foreign students taking online education in the United States, which has triggered heavy opposition. John Hopkins University has moved the court against this decision of the Trump administration.

Let us know that earlier prestigious higher educational institutions like Harvard University and MIT (Massachusetts Institute of Technology) have also filed suit against the US administration.

5000 foreign students will be affected

John Hopkins University filed a lawsuit in federal court on Friday, stating that the Trump administration’s decision would affect about 5,000 foreign students pursuing online education at the university. The university also said that ‘the new rule of sending foreign students who do not enroll in individual classes back to their country’ has dealt a ‘sudden and unexpected’ blow to John Hopkins.


Therefore, the university, in its complaint filed in the district court of Washington, requested a temporary restraining order on the proposal for new visa rules. University President Ronald J. Daniels called the administration’s decision unnecessary, ruthless and hostile.

F-1 and M-1 students will not get admission

Let us tell you that due to Corona infection, the Trump government had issued a big order regarding foreign students living in America. On Monday, the US government announced that the visas of students whose classes are being held only on the online model.

According to the department, such students will not be allowed to come to America and those who are still in America will have to leave the country. If they do not do so, the students may suffer the consequences. Explain that a large number of Indian students live in America. In such a situation, Indian students have suffered a major setback since the Trump government order.


Let us tell you that the Trump administration announced new visa rules on Monday. Under this new rule, only those foreign students (Student Visa) pursuing education in the US will be allowed to stay in the country who will be taking individual classes in any institute in the coming semester (September to December).

According to this new visa rule, foreign students receiving online education must return to their home country. Since many American universities decided to hold online classes due to the Coronavirus, many foreign students are now forced to leave the United States.