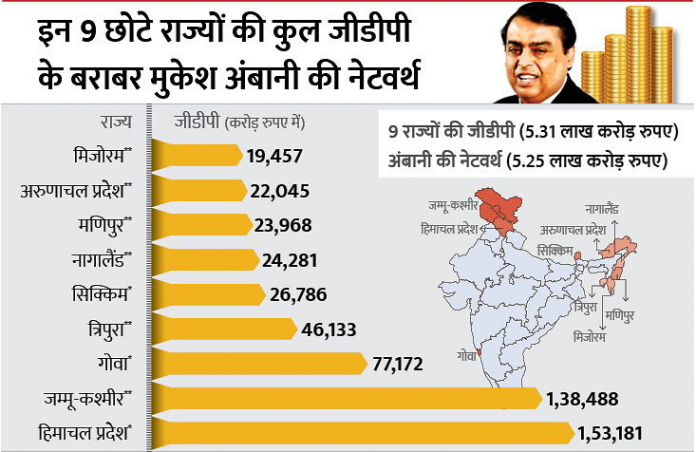 
Also Read: Foreign filmmakers will be allowed to shoot in the country from a single window: Piyush Goyal

In the list of the world’s 10 richest, Mukesh Ambani is not only the only Indian, but also the only person from Asia. Mukesh Ambani has the same wealth as the GDP of 9 small states of the country. The total GDP of these 9 states is 5.31 lakh crore rupees.

The shares of Reliance Industries have also seen a growth of more than double since March. On 23 March, RIL shares were priced at Rs 875.72 on BSE. However, the share price rose to Rs 1880.20 by 10 July. Because of this Mukesh Ambani’s net worth has increased significantly.


However, according to Forbes, apart from Jio, the rise in Ambani’s net worth is also due to Reliance Industries’ oil and gas business. The company gets annual revenue of $ 88 billion (about Rs 6.68 lakh crore) from both these sectors.

Mukesh Ambani is the richest person in the country. His assets are 5.25 lakh crores. Radhakrishna Damani, owner of D-Mart’s parent company Avenue Supermarket at number two, has assets worth Rs 1.21 lakh crore. That is, there is a difference of more than Rs 4 lakh crore in the wealth of the first and second richest personalities.