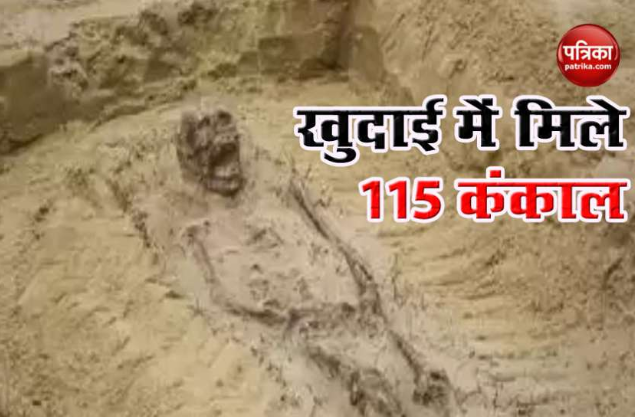 Warsaw. During the ongoing excavation for road construction in the European country Poland, 115 male skeletons found sensation. People are surprised about this. The biggest thing is that 70 percent of children have skeletons in such a large number of male skeletons. It is being told that all these remains are more than 500 years old i.e. from the 16th century.


According to experts, coins have been found in the mouths of skeletons. These coins are from the 16th century. Experts say that in the 16th century, the dead persons were put coins in their mouths for salvation of the soul and then buried the bodies with the same coins.

Also Read: Ram Vilas Paswan’s wish that son become minister, said- with him in every decision of Chirag


Excavation of cemetery was going on for road construction

According to media reports, an important road construction work is underway to connect Greece to Lithuania. Under this project, excavation was going on near the cemetery. All these remains found from the tomb belong to the 16th century.

There is also an old belief that a coin was placed in the mouth of dead persons to bring the soul from across the river separating the world of living and dead.


Giving information, the National Director of National Roads and Motorways has said that 115 skeletons have been found so far in the investigation. According to the statement of archaeological observations, 70 to 80 percent of the skeletons are children. The department said that all the skeletons had their backs on the ground, their hands on one hand and some coins in their mouths, which is truly amazing. Explain that the coins in the mouth of the dead are called motel or obol, which is a very old Christian tradition.

Many people also believe that it can be a collective grave. However, based on written accounts and legends of the cemetery, many evidences of mass graves have not been found. It may be that these skeletons were buried very carefully.