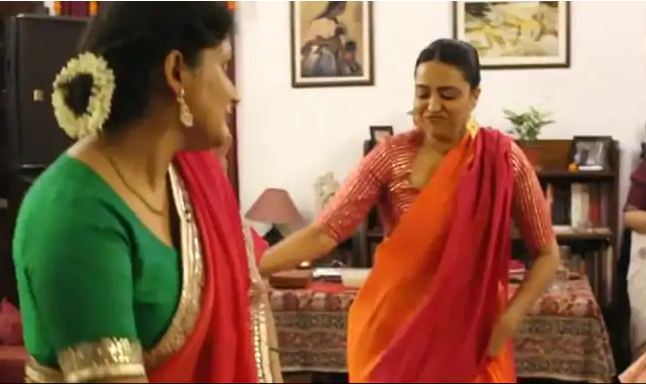 This video of Swara Bhasker is getting viral on social media. See video

Bollywood actress Swara Bhasker always remains in the headlines. Swara Bhaskar, who is drawing attention from his views on every current issue, is making headlines this time for attending his maternal uncle’s wedding. At the wedding, Ra Bhasker added a lot of color. He has also shared pictures and videos of this function on Instagram. In this video, Swara Bhaskar has danced fiercely. Fans are reacting fiercely to their videos.


Swara Bhasker can be seen in this video that she is seen dancing to the song ‘Navrai Majhi’ from Sridevi’s film ‘English Vinglish’. He has told in the caption that the mehndi ceremony is happening. It is being told that his maternal uncle is getting married to his college friend. During this, Swara Bhaskar looked very cute wearing a sari. This video of him has been viewed more than 2.5 lakh times.


Swara Bhasker had recently come into the discussion about her webseries. His web series ‘Rashbhari’ has been released on Amazon Prime Video. There was a lot of controversy about a scene of ‘Rasbhari’. Explain that Swara Bhaskar got recognition for playing the role of Kangana Ranaut’s friend Payal in the film Tanu Weds Manu. Swara Bhaskar is known for her strong acting in films like Tanu Weds Manu, Fish Water Queen, Tanu Weds Manu Returns, Raanjhanaa, Prem Ratan Dhan Payo, Veere Di Wedding, Anarkali Of Ara.