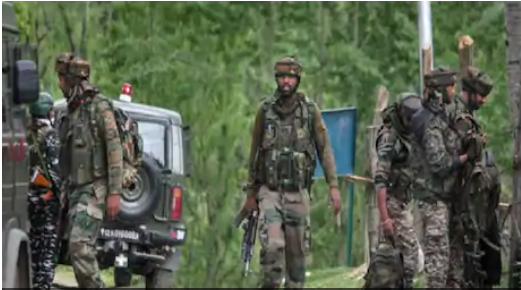 In the encounter between the Indian security forces and the terrorists, an army man and a Jammu and Kashmir policeman were injured.

Srinagar. Encounter is going on between Indian Security Forces and Terrorists since Tuesday morning in Guso sector of Pulwama in Jammu and Kashmir . Security forces have surrounded three terrorists and firing has been going on for a long time. In Guso sector, two soldiers have been injured by firing from the terrorists hiding from a house. The injured have been admitted to hospital. Given the seriousness of the case, the entire area has been cordoned off.


Also Read: careful! This dangerous Android Virus returned again after 3 years, a bank account is being emptied with just one message

Security forces had received intelligence that Pulwama of Jammu and KashmirSome terrorists are hiding in the Guso sector. The news was that the terrorists are preparing a plan to execute a big conspiracy by hiding in a house. On the basis of the information, the army formed a team with a group of local police and CRPF and started to surround the area.


Seeing themselves surrounded, the terrorists started firing from inside the house. In this incident, an army soldier and a Jammu and Kashmir policeman were injured. The injured were immediately admitted to the hospital. According to the news so far, three terrorists are hiding in the house and firing. Indian security forces have surrounded the entire area.