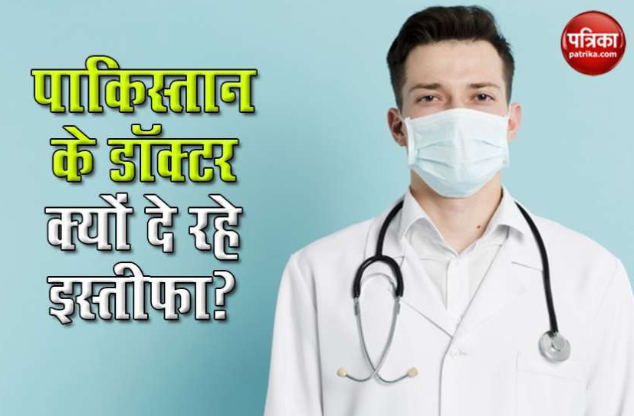 Lahore Pakistan (Pakistan) corona virus (Coronavirus) is spreading rapidly. Pakistan does not have enough resources to handle the pace of infection here. Health workers do not have the appropriate medical equipment to prevent infection. In such a situation, 48 doctors working in the teaching hospitals of the province resigned from their posts on Sunday citing their defense. This has shocked the country’s efforts in the war against Kovid-19.


Resignations have been accepted

So far 2,28,000 people have been found infected with the corona virus in Pakistan. Of these, more than 4,700 people have lost their lives. According to a notification issued by the Health Department of Punjab, 48 doctors resigned their posts. They are employed in government teaching hospitals. His resignation has been accepted. Most of these physicians are young. The resigned doctors were employed at Mayo, Services, Jinnah, General, Lady Atchison, Children’s Hospital, Faisalabad’s Sheikh Zayed, Allied and Civil Hospitals in Lahore and SZH Rahim Yar Khan and Nishtar Hospital in Multan.


A senior doctor at a public hospital in Lahore said that the doctors had demanded adequate medical equipment from the government for protection from the dreaded corona virus several times. But they have not received any help yet. Frustrated, the doctors had to resign. Earlier it was also requested to provide adequate safety equipment to prevent the corona virus. He said that it seems that the government is not too serious about the safety of medical personnel. According to Pakistan’s National Institutes of Health, more than 70 medical professionals have died so far due to Kovid-19. Most of them are doctors. More than 5,000 medical personnel have been found infected with it.

2.12 lakh cases of corona virus infection have been reported