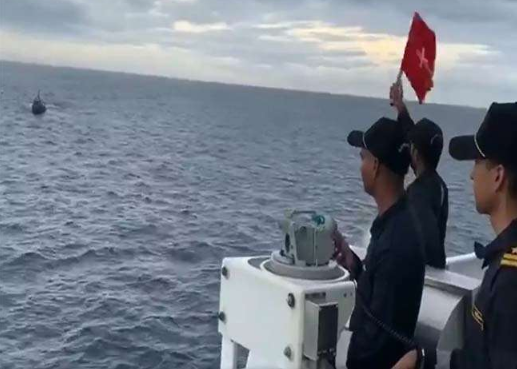 New Delhi Cyclone ‘Nisarg’, created due to changes in air pressure in the Arabian Sea on Tuesday, has taken a dangerous form. On Wednesday, it will hit the ground in Alibaug, about 94 km from Mumbai. There is a possibility of mass destruction from this storm. In Maharashtra, Gujarat, Union Territories of Daman and Diu and Dadar Nagar Haveli, strong arrangements have been made for the safety of the people. Today Mumbai, Palghar, Alibag and Thane are seeing the effect of this big storm, rain has also started. In view of Hurricane Nature, IndiGo Airlines has canceled 17 flights to and from Mumbai today, leaving three flights. However, this is also likely to change.

Prime Minister Narendra Modi also reviewed the preparations made for nature. Talking to the Chief Ministers of both the states, he assured all possible help. Experts believe that this is the first time such a storm will come in Mumbai. Dr. Sunita Devi, in-charge of the topic of hurricane in the Indian Meteorological Department, said that on Tuesday afternoon, the center of the cyclone resurgence southwest of Panjim city of Goa 280 Km and 430 from Mumbai was in the southwest Arabian Sea. It will take a more spectacular look in the next 12 hours.


According to him, on Wednesday, June 3, Nisarg would hit the ground in Alibag near Harihareshwar and Daman between North Maharashtra and South Gujarat. At that time the wind speed can be from 110 to 120 km. During this period, heavy rains may also occur in large areas. Director General of Meteorological Department Mrityunjay Mohapatra had said on Monday that more districts of Maharashtra will be affected by this storm than Gujarat. Mumbai, Thane and Raigad in the coastal areas of Maharashtra will have a greater impact. Fever of one to two meters higher than normal fever will come in the sea.

Many low-lying areas will be submerged. Fishermen are barred from going to sea. 34 teams of NDRF have been deployed. Director General of the force SN Pradhan said that 16 teams have been deployed in Gujarat, 15 teams in Maharashtra, two in Daman and Diu and one team has been deployed in Dadar and Nagar Haveli. People are being sent to safe places from the coastal region.

Meteorologist Roxy Matthew Cole of the Indian Institute of Tropical Meteorology said that Cyclone Nature is going to wreak havoc in Mumbai on June 3. If this happens, this will be the first time in history when a storm hits the coast of Maharashtra in the month of June. At the same time, Vineet Kumar, another researcher of the same institute, is considering this type of storm as a second chance. According to him, such a storm has come in May 1961.

Also Read: Cyclone Nisarga: Cyclone ‘Nisarg’ may create havoc in Maharashtra and Gujarat; Know when and where the storm will hit


NDRF and Gujarat Police are evacuating people from Mendhar and Bhat villages of Navsari district.

– The coastal guards in Gujarat are alerting the fishermen and are appealing to return to the port.

– People are being taken to safer places.

– All the fishermen in Mumbai are returning to the shore with their boats back.

NDRF teams deployed in both states

It will be seen more on Wednesday

According to IMD, the cyclone will be seen more on Wednesday. During this time the wind can run at a speed of 100-125 km / h. Some areas have been warned of heavy and excessive rainfall. However, it would be less dangerous than ’emphon’.

History of Mumbai is going to change

But this time cyclonic storm ‘Nisarg’ has predicted heavy destruction in Mumbai. The history of Mumbai will change as soon as the ‘storm’ hits the coast of Mumbai. Cyclonic storm conditions are forming in the Arabian Sea.

Flood hazard on the beaches

According to the India Meteorological Department (IMD), Cyclone Nisarg on June 3 will be active about 110 km north of Mumbai. Due to which, the metropolitan city of Mumbai will be prone to floods on all the beaches of Maharashtra. Wind speeds can range from 105 to 115 km per hour when converted into a cyclonic storm.

The Maharashtra government has issued an alert in Mumbai and adjoining districts regarding cyclonic storms. Along with this, teams of NDRF have also been deployed. The districts that are under the red alert for the storm include the names of Mumbai city, Mumbai suburban district, Thane, Palghar, Raigad, Ratnagiri and Sindhudurg.

The Indian Meteorological Department on Wednesday issued a warning of heavy rains in coastal areas of Thane, Palghar and Raigad, including Mumbai, due to natural storms. Apart from this, the Central Water Commission has feared that there may be heavy floods in Sindhudurg, Ratnagiri, Palghar, Thane, Mumbai and Nashik. It has also been said that strong and high waves can arise in the coastal areas of northern Maharashtra and southern Gujarat.

Why is there less danger in Mumbai?

Instructions not to go close to the beach

Seeing the severity of the storm, fishermen have been instructed not to go close to the coast. Besides, instructions have also been given to bring back about 15 thousand boats which have come out to hunt fish. Along with this, continuous monitoring is being done on the speed and direction of the cyclone.

Alert issued in Gujarat as well


Apart from this, alerts have been issued in Gujarat, including Maharashtra, Goa, Daman-Diu and Dadra Nagar Haveli. At the same time, the state governments have ordered the evacuation of people living in low places. A total of 23 teams of National Disaster Response Force (NDRF) have been deployed in all these states to deal with the threat of natural storm. At the same time, there are more than half a dozen districts, where the effect of the storm will be more visible. In such a situation, 10 teams of NDRF have been deployed in these districts.