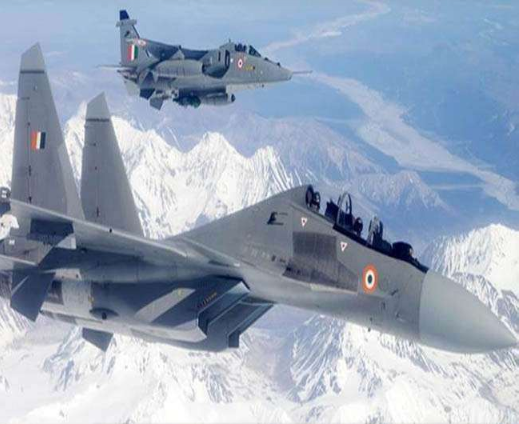 State Bureau, Srinagar.  In the midst of ever-increasing military tensions with China, the Indian Air Force has deployed its war planes such as Sukhoi and Mirage, which sour the enemy’s teeth in Ladakh. In Galvan Valley to Afgar-4 area, the army has also started additional deployment of soldiers and officers along with necessary munitions to deal with any situation.

Preparations can be gauged from the fact that 80 to 90 military trucks are going towards the forward areas of Ladakh every day for the last few days. Artillery and tanks have also been sent. Most of these trucks are being sent from the Kashmir Valley itself. Meanwhile, GOC in C Lt Gen YK Joshi of the Army’s Northern Command also reached Leh on Tuesday.


Sources said that the troops being deployed in the Galvan Valley, Hot Spring and Finger-4 areas were stationed at Leh and other places for the first few days to adapt themselves to the local geographical conditions. Artillery and tanks have also been sent to the forward areas of Ladakh.

Sources said that the 14 Corps of the Army based in Ladakh are fully capable of handling any situation. There is no shortage of artillery, tanks and other essential munitions and weapons. The military and military equipment being deployed from other areas is only for additional and advance deployment. The Indian Air Force has also increased its activities in Ladakh.

India flying Sukhoi and Mirage aircraft in its airspace


Indian Air Force pilots are flying Sukhoi and Mirage aircraft within their air range in East Ladakh. The Chinese Air Force is also continuously increasing its activities. According to the villagers settled in the Durbuk area adjoining the Galvan Valley in eastern Ladakh, the activities of the Indian Army have increased rapidly over the past few days. 80-90 trucks are heading towards the advance areas with the evening getting dark. Civil vehicles are also included in these convoys. He has seen such military activities since 1962.

Lieutenant General YK Joshi has also reached Leh from Udhampur on Tuesday morning. He also held a meeting later in the afternoon with 14 Corps Commander Lt Gen Harindra Singh and other senior military officers, taking stock of the situation in East Ladakh. Earlier, on 22 May, he had visited Leh during the visit of Army Chief General MM Narwane. Lt. Gen. Joshi, who had participated in the Kargil War, discussed with the authorities in the context of various negotiations between the two side military commanders at the local level to resolve the current deadlock with the Chinese Army. He directed that he should continue to take action to keep the activities of the Chinese army in line with the on-going situation.

Councilor Konchuk Stanzin of Chushul in Ladakh Autonomous Hill Development Council said that there are eight villages in the three panchayat circles. It has a population of over two thousand. People are scared. He feels that a fight can break out at any time. Our elders are saying that they saw such a military stir in 1962 at the time of the war with China. Cannon and tanks are being deployed in forward areas.

This time the shepherds did not go to Galvan valley

Konchuk Stenzin said that he has visited the villages in the past week. People are engaged in farming, but there is tension among them. These villages have an aerial distance of about 10 km from Galvan Valley and Afgar-4 area. She said that the shepherds in this area used to go with the cattle every year in summer, but have not gone this time.