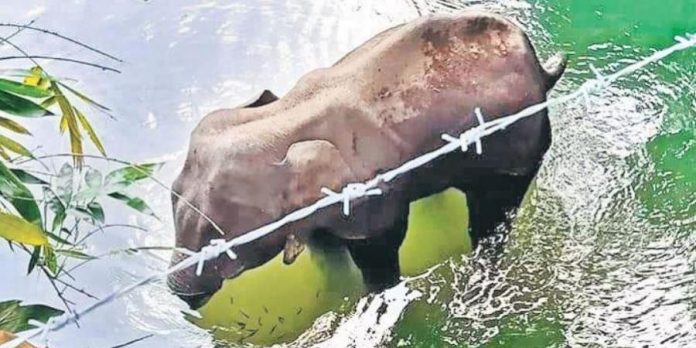 She suffered excruciating pain, but remained calm; died standing in Velliyar in Malappuram


THIRUVANANTHAPURAM: A pregnant wild elephant originally belonging to Silent Valley National Park (SVNP), Palakkad, met with a tragic death after a hooligan fed it a pineapple packed with firecrackers inside, which must have been allegedly used as a snare to catch wild boars. The injured elephant remained calm though she was under excruciating pain and didn’t create any havoc much to the disbelief of the forest department officials. But in a rare instance, the elephant died at Velliyar River, Malappuram, on May 27, in a standing position with its trunk in the water.


The 15-year-old elephant had stood in the river to feel buoyant so that its mouth and tongue which had exploded could get some form of relief. The incident was brought to light by Mohan Krishnan, Section Forest Officer, Nilambur, on his Facebook page where he had acted as the Rapid Response Team official to rescue the elephant which was in distress. The post has since become viral with more than 1,200 shares. The elephant had allegedly come to the town hoping to get more food so as to care for its calf which was in its womb.


When the pathetic condition of the elephant came to the knowledge of the forest officials, they brought in two Kumki elephants, Surendran and Neelakantan to bring the injured elephant to the shore from the Velliyar River. But much to the disappointment of forest department officials, the elephant met its death in water. Postmortem examination revealed that the final cause of death of the 15- year-old female elephant was due to asphyxia where water had got into its lungs and trachea. Dr David Abraham, Assistant Forest Veterinary Officer, Thrissur, who did the postmortem told TNIE that on first observation itself it was clear that the elephant would not survive. The forest officials wanted to euthanize the elephant which was in severe agony. But unfortunately, the message from the top echelons of forest department was to return it back to the SVNP.


“I have so far done more than 250 postmortems of elephants alone in my more than two decades career. But this was the first time I was so moved as I could hold the foetus of the baby in my hands. Initially, none of us was aware that the elephant was pregnant. After I had seen its heart and then happened to see the amniotic fluid did I realize that it’s pregnant”, said Dr David Abraham.

Another senior forest official told TNIE that this is not the first time an elephant met its death due to explosion in its mouth caused due to crude country bombs or firecrackers being used in snares to catch wild boars by people afraid of destroying its vegetation.


During April also, another wild elephant in Pathanapuram in Kollam district had died in similar circumstances. But the latest incident in Palakkad is more touching as in another 22 months it would have delivered a calf elephant. Samuel Pachuau, Wildlife Warden, SVNP, told TNIE that already a probe is on into the incident which saw the elephant dying under tragic circumstances.

“We have increased our intelligence networking as well as boundary patrolling as the incident has happened between the park (which is on the buffer zone) and the plantation areas,” said Samuel Pachuau.