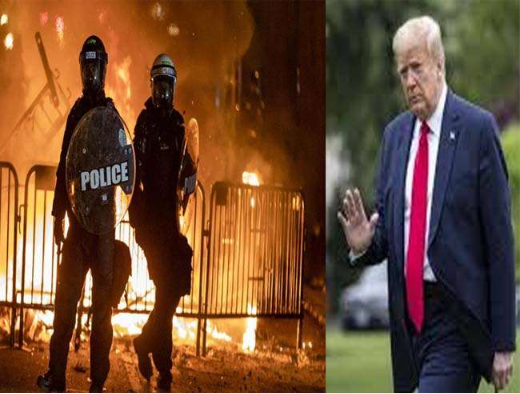 Washington, agencies. The situation in America, which had been scorched for six consecutive nights after the death of a black man George Floyd in police custody, became more uncontrollable. Demolition violence is burning the city by the fire. Curfew has been imposed in 40 cities. The fire of violence has reached the White House. The protesters, who reached close to the residence of the US President, vandalized. The raging mob set the American national flag fluttering on the buildings. Later on the roads blocked traffic by dropping trees.

Police also released tear gas shells to disperse the protesters. More than four thousand people have been arrested across the country on charges of spreading violence. So far, five people have died and dozens of security officers have been injured in violent incidents across the country. Angered by the violence, President Trump has fiercely reprimanded the governors of all states. Meanwhile, according to information from various sources, President Donald Trump was briefly taken to an underground bunker after protesters gathered outside White on Friday night.


The trump stayed in the bunker for about an hour. He was later brought up. America’s First Lady Melania Trump and her son Baron were also taken to the bunker. Curfew has been imposed in 40 cities of the country, including the capital Washington DC, in view of the violence and sabotage by protesters. With the emergency in Virginia, all government buildings in California have been ordered closed until Monday. To control the situation, five thousand National Guard personnel are deployed in 15 cities. Two thousand additional personnel have been kept on alert.


Governor should take a hard stand

On Monday, Trump addressed the governors of all the states through video conference and strongly reprimanded them for not stopping the violence. He expressed more displeasure at the governors of the opposition party Democratic Party. He said that the world is laughing at the attitude of your people. If you are not able to stop the violence, then you will not be of any use. You have to be tough. If you are not rigid, these anarchists will trample you and leave. You people should immediately deploy the National Guard in your state to stop the violence. He also told the Attorney General of India, Bill Barr, that he should be arrested on a large scale for looting and burning the flag of the country and if necessary to punish them, strict laws should also be made. . He is suspected of left-wing extremists for the violence.


Also Read: Big decision of US President Trump, broken relationship with WHO; Restrictions on China

Blacks in support of Hollywood Floyd

The whole of Hollywood has come to support the protests against the death of George Floyd. Major Hollywood studios Disney, Warner Bros., Paramount, Netflix, Amazon and The Academy of Motion Pictures have issued a statement in support of the black community. Disney said in a statement, ‘We are against racism. We support inclusive growth. We stand with our black employees, creators and the entire black community. We should unite at this time and speak out against racism. ‘

Google on Sunday published a message on its website homepage supporting racial equality. The company’s CEO Sundar Pichai said in a tweet that today US Google and YouTube on their homepage show solidarity in memory of George Floyd, Breona Taylor, Ahmed Arbari and in favor of racial equality. We give assurance to those who feel sad, angry and afraid of such incidents that they are not alone. Along with this message, Pichai has also shared a picture of the Google homepage. There is a black ribbon at the bottom of the homepage and its equivalent reads, ‘We support racial equality’. YouTube has changed the color of the icon of its official Twitter handle from red to black.

National Security Advisor Robert O’Brien denies that racism is rooted in the US police. He said that 99.99 percent of the officer is completely American. Many of these are also African and Asian. However, due to some bad people, the police continue to face such allegations.

Arrested white police officer Derek Chauvin has been charged with third degree murder, but Floyd’s attorney Benjamin Crump said while speaking to CBS News that the case was related to first degree murder. He said that prima facie Chouvin’s intention was to kill Floyd. With this intention, he has held her throat for nine minutes. In the meantime, Floyd’s family has asked to issue a post-mortem report conducted through private doctors at his level.

Truck entered into protesters in Minneapolis

On Sunday, a truck carrying people demonstrating on the highway of Minneapolis entered. The protesters later caught the driver and beat him badly. There is no news of any protestor being injured. Police has arrested the truck driver who arrived on information. The truck belonged to the Transport Company of Ohio.

Extremist organizations believed to be behind the violence

US officials are trying to find out whether extremist organizations are involved in such protests. He is also keeping an eye on the false information being spread through social media. Actually, it was peaceful when the protests first started, but suddenly it turned violent. Initially, it has been said that leftist organizations are involved in this, but now experts are also trying to find out whether there are extremist organizations in the midst of these demonstrations. At the same time, the police is also eyeing the unexpected increase in social media in groups with less than 200 users.