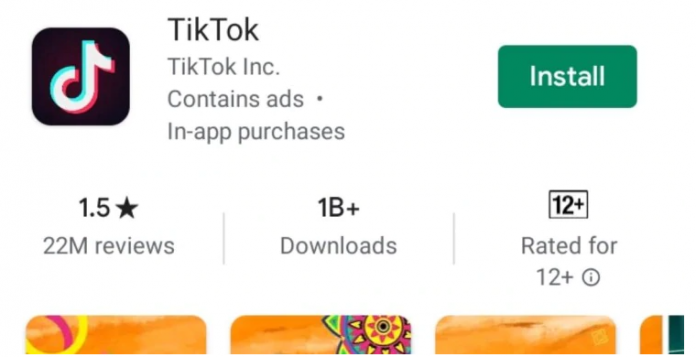 he last few weeks have been a little harsh on TikTok, the Chinese the video-making app because of the number of controversies it has landed itself in. It was still the talk of the town but for all the wrong reasons.
Hashtags pressing TikTok to be banned and India against TikTok started trending on Twitter.

TikTok’s Play Store ranking fell too, from over 4 stars to 2 stars and then it further fell to 1.2 stars. TikTok rankings were at an all-time low until they recently started reviving bit by bit.


In the latest development, the app’s ranking has reached 1.5 stars with 22 million user reviews.

This could be the result of Google removing user reviews so that the app could get some balance.

Nobert Elekes, a verified Twitter user and a data storyteller as he claims himself to be recently noted in a tweet “Apparently, Google deleted over a million TikTok reviews overnight, that’s why the rating increased from 1.2 to 1.6 stars.”

As of today, Playstore shows 22 million reviews for TikTok and it has 1.5 stars. This means that from last week, Google has removed around five million user reviews.

Google has, however, not stated the reason for the removal of these reviews but it has surely improved the ranking of the app, even if it is to some extent.

Last week, when TikTok’s rankings were at an all-time low, Elekes wrote “India is about to destroy two viral things: – Coronavirus, – TikTok”

TikTok’s ratings greatly fell last week due to enraged people calling out to Faizal Siddiqui, a TikTok user who glorified acid attack on his TikTok profile. The video drew severe criticism and Siddiqui with subsequently being banned from the platform and the videos being removed.

Carry Minati had created a video titled YouTube Vs TikTok, part of an ongoing feud between YouTube and TikTok users. His video went viral and was taken down for violating YouTube’s terms of service. This happended because many TikTok users reported the video saying it was bullying in nature.