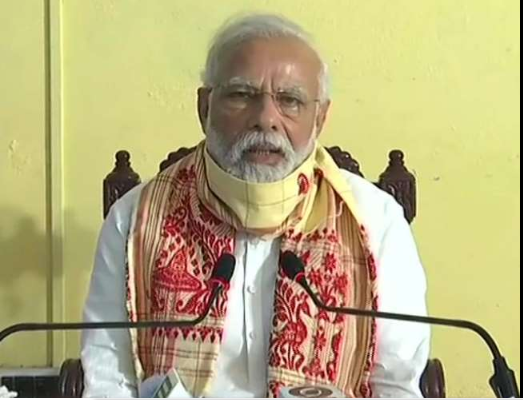 New Delhi / Kolkata Prime Minister Narendra Modi has announced a relief package of Rs 1000 crore for cyclone affected Bengal and Rs 500 million for Odisha. He announced to give 2-2 lakh rupees to the families of those who died in the storm, and 50-50 thousand rupees to the injured. On Friday, the PM along with Chief Minister Mamata Banerjee and Governor Jagdeep Dhankad conducted an aerial survey of the cyclone affected areas of North and South 24 Parganas. It then held a review meeting with the CM at Basirhat College ground, where he assessed the damage from the storm.


Governor Jagdeep Dhankar has given a grant of Rs 50 lakh to the Chief Minister’s Relief Fund to deal with the destruction of Emphon. Mamta Banerjee had also announced on Thursday the grant of Rs 2.5 and a half lakh to the families of those who lost their lives in the storm. On Friday, the European Union has also announced a grant of five lakh euros (about four crore 14 lakh rupees) to help the people affected by emphon.

Declaration of help for the relatives of the dead

On the tour of Bengal, the PM announced that the Union Government will give an economic package of one thousand crore rupees for the convenience and needs of the cyclone affected people of the state. This is an immediate help. Apart from this, the central government will continue to provide more necessary help. Also, the families of those who died in the storm will be given Rs 2 lakh each and the injured will be given 50-50 thousand rupees. Significantly, on Thursday itself, Mamta had demanded central assistance of one thousand crore rupees.


Modi said that the cyclone has affected Bengal and Odisha at a time when the country was struggling with the Corona crisis. The people of Bengal have been most affected by this. The central government will stand firmly with the people of Bengal. Center-states will work together. He also praised Bengal CM Mamta Banerjee and Odisha CM Naveen Patnaik for dealing with the situation.

Inspected the affected area for one hour

Modi landed at Dum Dum Airport at 11:00 am on Friday, where he was received by Chief Minister Mamata Banerjee and Governor Jagdeep Dhankar. From there, helicopters arrived to conduct aerial surveys. The affected areas were inspected for about an hour. The Prime Minister then went to Odisha, where an aerial survey was done to assess the damage in the cyclone affected areas.

Loss of one lakh crore rupees to Bengal: Mamta

Chief Minister Mamata Banerjee said on Friday that there was a loss of one lakh crore rupees due to emphon in the state. After an aerial tour and review meeting of the affected areas in Basirhat with Prime Minister Narendra Modi, he said that there is a need to work together in this hour of crisis. Banerjee also informed Prime Minister Narendra Modi about the situation arising after the cyclone in the state.

Mamta Banerjee said that 82 people have lost their lives in the state due to the storm. Infrastructure, public and private property have suffered extensive damage in North and South 24 Parganas, East and West Midnapore, Kolkata, Howrah and Hooghly districts.


The President assured Mamta of help

President Ram Nath Kovind called Mamata Banerjee and assured her of all possible help due to the damage done to Bengal by the cyclone. After this Mamta Banerjee thanked him.

Bangladesh Prime Minister Sheikh Hasina has said that she is confident that Bengal will soon recover from this crisis. In this hour of crisis, I pray that the people of this country face it courageously.

Central team will come to odisha

Modi arrived at Bhubaneswar Airport in Odisha from Bengal and from there, an air force helicopter made an aerial survey of cyclone-affected Jagatsinghpur, Kendrapara, Bhadrak, Baleshwar district. After this, Bhubaneswar reached the airport and held a review meeting. After meeting with Chief Minister Naveen Patnaik and senior officials of the state, announced an economic package of Rs 500 crore to the state. He said that after assessing the actual loss, the Odisha government will send its report to the center, after which a team of central government will also come to Odisha to evaluate it. After this, the central government will provide the kind of assistance that the state will need.