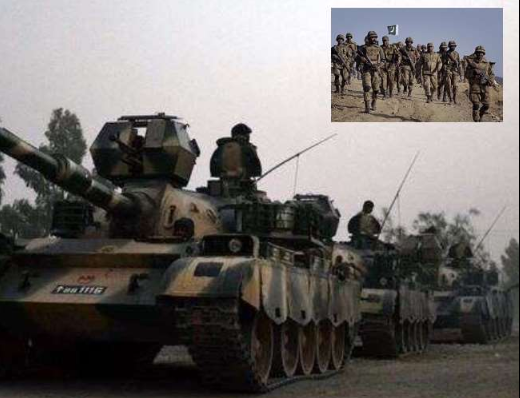 Srinagar, In the situation arising out of Corona, the effect of increased cooperation between India and America is beginning to be seen on the Line of Actual Control, Line of Control and International Border in Jammu and Kashmir. While China has increased troops in the area along the Line of Actual Control in Ladakh, Pakistan has deployed additional military divisions along the international border in Samba and Hiranagar. In addition, Pakistan has deployed anti-aircraft guns with the artillery forward.

Defense sources said that the Pakistan Army had intensified activities in areas adjacent to the LoC since April. Initially it was seen as part of its strategy to ensure infiltration of terrorists in Jammu and Kashmir but now this deployment has raised questions. Pakistan has brought forward the artillery and during the last 15 days it has also deployed anti-aircraft guns along the Line of Control. In such a situation, this action of Pakistan cannot be ignored like this.

Official sources said that the Pakistani army has violated the ceasefire in Poonch sector the most during the last one month. Also on the international border in Hiranagar sector. Based on his assessment of these activities and intelligence reports, it is revealed that he has taken this action not only to ensure infiltration but also through these he has brought the attention of the Indian Army, speeding up military preparedness in the forward areas.

The Pak Army has also established its operational centers among the advance civilian settlements. Pakistan has brought a partial change in the Order of Battle of its army, on the basis of which it can be said that it is going to change it in the next few days. Sources said that while there is an unusual stir in the Pak Army across the Line of Control and the International Border, the Line of Actual Control in East Ladakh has also intensified during this period.


There have also been three confrontations with the Chinese military. On the waves of Lake Pangang, the soldiers of India and China in their patrol motorboats stood in front of each other with banners. China has suddenly increased its troops in the Aksai Chin area. This is the first time in two decades. At the same time, India has also flown war planes in the adjoining areas with China for the first time.

Able to deal with any situation

A senior Northern Command officer said that we have an eye on all the activities from the international border to the eastern Ladakh across the Line of Actual Control with China. Able to deal with any situation. We have also made extensive preparations in view of the intentions of the neighboring countries. He will be given appropriate answers according to what he does.


China is trying to pressure

Major General (Retd) Govardhan Singh Jamwal, an expert on defense affairs, said China always looks for an excuse to move forward. India is a big challenge for him. Due to the Corona crisis, there has been an increase in the US and China. At the same time, India-US relations have improved. China is trying to pressurize India by intensifying military activities not only in the northeast but also in the adjoining areas of Ladakh.

The app ecosystem in the Indian market has been taken over by Chinese applications. Continue reading to check out some of the most popular...