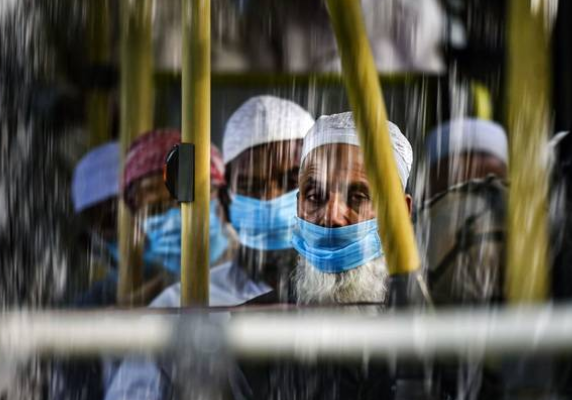 Several people who took part from Tamil Nadu at the national capital recently have tested positive, Palaniswami said adding 1,131 men have returned of the about 1,500 people who went for the event.

The whereabouts of a section of people from Tamil Nadu who took part in the recent conference held by the Tablighi Jamaat at Delhi is not known yet and in view of several attendees testing positive they should voluntarily get in touch with authorities, Chief Minister K Palaniswami appealed here on Wednesday.

Several people who took part in the meet from Tamil Nadu at the national capital recently have tested positive, Palaniswami said adding 1,131 men have returned of the about 1,500 people who went for the event.


“About 515 people have been identified… others who took part in the meet should voluntarily get in touch with the authorities… we have not got the addresses of others fully,” he said apparently indicating that their whereabouts could not be ascertained so far.

Palaniswami told reporters that while a section could not be contacted yet, others have been quarantined in Delhi. Of the attendees from Tamil Nadu, 50 tested positive on Tuesday and totally there are 124 cases in the state.

Considering the severity of coronavirus and its potential to adversely impact the larger society, returnees should approach the authorities so that they could be tested and treated if needed, he said.

The government has already said that several district administrations could not establish contact with many returnees and senior officials have said that police department was also working to trace them.

The National Health Mission Tamil Nadu separately has appealed to ‘Tablighi Jamaat brothers,’ to contact health authorities immediately at specific phone numbers (7824849263/044 46274411) as participants of the conference might be at risk of contracting coronavirus.


Asked if participants at an event held by Isha Yoga last month in Tamil Nadu will be tested, he said it will be done if they had symptoms. The government ordered closure of all places of worship irrespective of religion, he added. On the chances of lockdown getting extended beyond April 14, he said only the Central government will take a decision.

To a question of perceived slackness by people in sticking to lockdown, he said “every life is important, everybody should play a role and come together and only then the spread of coronavirus could be stopped.” Without understanding the ramifications of the infection some people were going about in public places and this must be avoided, he appealed.

In a separate audio, he urged the people to stay back at home and reassured that the government was taking all steps to halt the spread of the contagion. There is no bar either on agricultural activities or in taking the produce to markets, he said.


Palaniswami earlier inspected the functioning of Amma Canteens along with Fisheries Minister D Jayakumar and hailed the role of the eateries in providing quality and low cost food to people.