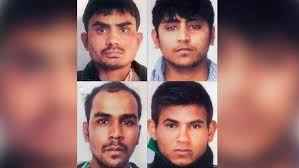 Nirbhaya case: The death warrant was issued a day after President Ram Nath Kovind rejected the mercy petition of Pawan Gupta, the last of the four death row convicts.

New Delhi: The four convicts, who got death penalty for the gangrape and murder of a 23-year-old medical student in Delhi – dubbed Nirbhaya – more than seven years ago, will be hanged on March 20, at 5:30 am. This is the fourth death warrant issued by a Delhi court.


The death warrant was issued a day after President Ram Nath Kovind rejected the mercy petition of Pawan Gupta, the last of the four death row convicts. With the President’s rejection, the convicts had exhausted all options for relief from the death sentence.

Additional Sessions Judge Dharmendra Rana fixed March 20 as the new date of execution after it was told by the Delhi government that the convicts have exhausted all their legal remedies. The lawyer for the four death row convicts also told the court that there was no legal impediment for court in proceeding to fix the date of execution.


The authorities of Delhi’s Tihar Jail, where the men are lodged, had said they approach courts for a fresh date of execution.

“I hope this is the final date and they would be hanged on March 20. While dying Nirbhaya asked to ensure they get such punishment that such crime is not repeated ever,” Nirbhaya’s mother Asha Devi said.


On Monday, the Patiala House court had refused to hold the execution of the four Nirbhaya case convicts, who were to be hanged at 6 am on Tuesday.

The same day, the court dismissed an application to stay the execution of Akshay Thakur, 31, Pawan Gupta, 25, Vinay Sharma, 26, and Mukesh Singh, 32, who had staggered multiple petitions challenging their death sentence. The court, while reserving judgement on Pawan Gupta’s mercy petition, tore into the convict’s lawyer for filing the petitions at this stage.


The four convicts, along with two others – one of them a minor – had gang-raped the young woman and tortured her with an iron rod on the night of December 16, 2012. She died on December 29 at a hospital in Singapore.

One of the attackers, just short of 18 when the crime was committed, was released after spending three years at a reform home. The main accused, Ram Singh, was found hanging in jail.

The brutality of the attack had outraged the nation bringing thousands on the streets in protest, which led to key changes in the law and security system.