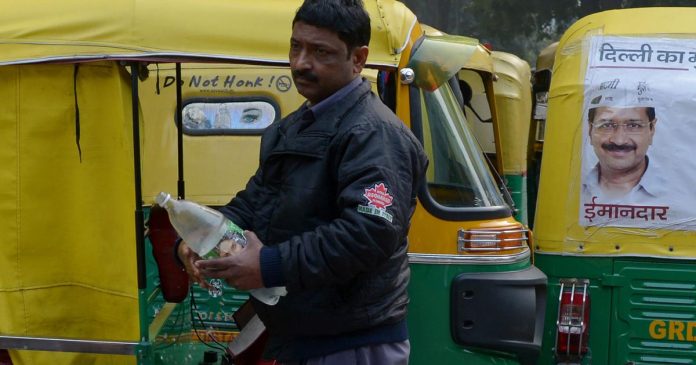 
A file photo of an auto with a poster of Delhi Chief Minister Arvind Kejriwal. | Sajjad Hussain/AFP
The Delhi High Court on Tuesday sought the response of the Aam Aadmi Party government, the police and the Election Commission after a petition challenged a Rs 10,000 fine levied on an auto-rickshaw driver for displaying an “I love Kejriwal” poster on his vehicle, PTI reported.


The driver, identified as Rajesh, was penalised on January 15 for the poster, according to Hindustan Times. Rajesh said he was not asked to put up the poster by any political party, and claimed he did it on his own last year. The driver claimed the traffic police fined him while he was on his way from Kalindi Kunj to Apollo Hospital. In his petition, Rajesh said the police violated his fundamental right, and urged the court to set aside the penalty.


The lawyer representing the government and the police sought some time from the court to examine why Rajesh was fined, and promised to file a status report on the matter. The Election Commission’s counsel said the driver might have been fined because of alleged violation of the Model Code of Conduct. The petitioner’s advocate argued that the poster was not a political advertisement, and pointed out that it was put up at the driver’s expense. The case will be next heard on March 3.


Meanwhile, Delhi Chief Minister Arvind Kejriwal lashed out at the Bharatiya Janata Party, asking it to stop targeting the poor. “The BJP through its police is targeting poor auto drivers using false challans,” he tweeted. “His only mistake is that he has written ‘I love Kejriwal’. Such maliciousness against the poor is not right. I appeal to the BJP to stop taking revenge against the poor.”