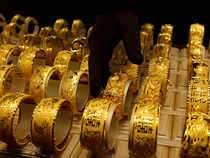 Ministry of Consumer Affairs, Food and Public Distribution has notified hallmarking in `The Gazette of India’ and it will become compulsory from January 15 2021.Mandatory hallmarking was mooted way back in 2007 and had been stalled for some reason or the other over the last 13 years.

The jewellers have been given a year to hallmark their jewellery that is to be sold in three categories, 14 carats, 18 carats and 22 carats.


The onus is on the jeweller and not the buyer or even the buyers who want to sell their old jewellery to comply with the norms. The penalty for violation includes a jail term apart from a fine. Smart buyers could do well to insist on buying only hallmarked jewellery even in the intervening one year period.


Even though the first phase of the US-China trade was signed on Wednesday in Washington, the US president’s caveat that tariffs would be withdrawn only after the second phase was signed.

Moreover, low US economy numbers on PPI gave a further boost to the gold price. The yellow metal closed in London at $1,549 per ounce. Not only that, gold closed in New York in the $1556-1557 per ounce range. The overall range for gold during the day was $1546.70-$1559 per ounce. At the moment, gold forecasts show two extremes. While some predict gold to cross $1800 per ounce others see gold below $1400 per ounce during the year.