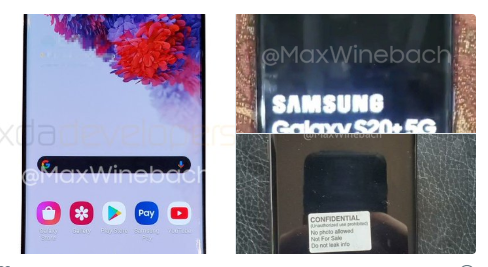 
The Galaxy S20+ also has fewer buttons as the Bixby button is now gone, hopefully for good.
As I mentioned in the article, the Galaxy S20+ isn’t very curved. It actually feels flat in the hand. This is because Samsung is using 2.5D glass. For those who hate curved screens, you all will be very excited.

2.5D glass is the same type of curve as the Pixel 2 XL.
Another of the live images show the phone’s rear with the now-familiar rectangular camera housing. There are four cameras – three vertically arranged on the left while the fourth is nestled between the LED flash and a microphone on the right.

Max said he has more details about the phone including videos of the device. So keep your eyes peeled for more Samsung leaks this week.