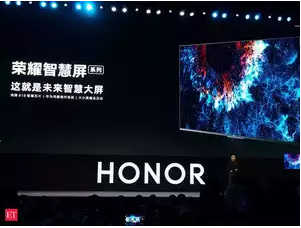 The laptops will be based on Intel and AMD chipsets, a top company executive told the media during a visit to company’s headquarters in Shenzhen.Laptops with AMD processors are expected to be launched in India in the first quarter of 2020 along wi…

SHENZHEN: Chinese technology major Honor, a sub-brand of Huawei, plans to enter India’s PC market with the launch of two Windows-based laptops in 2020.

The laptops will be based on Intel and AMD chipsets, a top company executive told the media during a visit to company’s headquarters in Shenzhen.

“We are working with Microsoft for our laptops and will be launching two laptops in India in 2020,” James Zhou, president-overseas marketing and sales at Honor, said while adding that one of the laptops to be launched will be Honor MagicBook. The executive, however, did not disclose the exact dates of the launch. Laptops with AMD processors are expected to be launched in India in the first quarter of 2020 along with the global launch, the company said.

The company also has plans of foraying into television space in India as part of its product portfolio expansion.

“We have plans to launch Honor Vision in India and many other countries,” said Zhou.The executive said the company will continue to invest in the India market. “We will focus on online. We will launch more devices in India including tablets and PC. We are looking for partners, not limited to local manufacturers,” he said. Honor is also in talks with 150 top apps in India to get them on its HMS (Huawei Media Services), ET reported recently. The company is in touch with China as well as India developers, who are expected to help the company in regions like Europe as well.