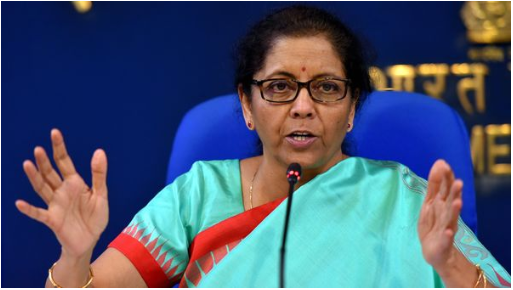 NEW DELHI : Union Finance Minister Nirmala Sitharaman, Chief Economic Adviser K V Subramanian and other top officials of the finance ministry addressed a press conference today on various economic issues and measures undertaken. Sitharaman stressed that the government will intervene on economic issues and those relating to the industry as and when required.

On the buzz related to

Here are the highlights:

-I am not willing to discuss as to where the economy stands. I am interested in working towards improving things: Sitharaman.

-On the IBC, the government has been very quick-footed: Sitharaman

-I will not engage in speculations related to interest rates or inflation: Sitharaman.

-There are reports that prices of onion have decreased in several places. We are also importing: FM

Nirmala Sitharaman on possibilities of hike in GST rates: “The buzz is everywhere except in my office. I have had no conversations on the GST Council meeting with my team yet”.

-On Rahul Gandhi’s rape comment, Sitharaman said it is a matter of shame that a senior leader of the Congress speaks forgetting about the dignity of women. She describes his comment as a “horrendous” one.

-I am working (on economic issues) wherever it is needed: Nirmala Sitharaman

-No comments on stagflation: Sitharaman

-I will continue to address the problem of the industry as and when it is required: Sitharaman.

-We will get a fairy good estimate on the impact of corporate tax reduction on December 15, the last date of payment of advance tax: Revenue Secretary Ajay Bhushan Pandey.

The total refunds have increased by 27.2% this year: Pandey

-Any document from the income tax department without a DIN number is not legally valid. You don’t need to reply to it: Revenue Secretary Ajay Bhushan Pandey.

-We want to bring down the pendency of disputes: Revenue Secretary.

-To clear pending refund of MSME, a drive was undertaken in September 2019

-Income tax refunds have increased by 17% as against last year: Pandey.

-From Jan 1, 2020, it will be optional for taxpayers with turnover of more than ₹500 crore to generate e-invoice for all B2B transactions.

-Unpaid family labour has gone down

-In urban India, there is a shift from self-employment to salaried jobs.

-CSR violations have been decriminalised and will be treated as a civil offence.

-CEA KV Subramanian: Evidence of measures to boost investment is actually seen in the record FDI inflows – US$ 35 nillion in the first half of 2019-20 as against US$ 31 billion during the same period last year. It’s a good sign of foreigners seeing India as a very important destination.

-Government and PSU dues of ₹61,000 crore cleared in the past two months, CEA said.

-Subramanian said the government has focused on clearing all past dues of PSUs, enabling retail credit by supporting NBFCs and HFCs and supporting MSMEs by bill discounting.

-Nirmala Sitharaman said she will highlight the recent Parliamentary measures, and the progress on the measures introduced in the past.