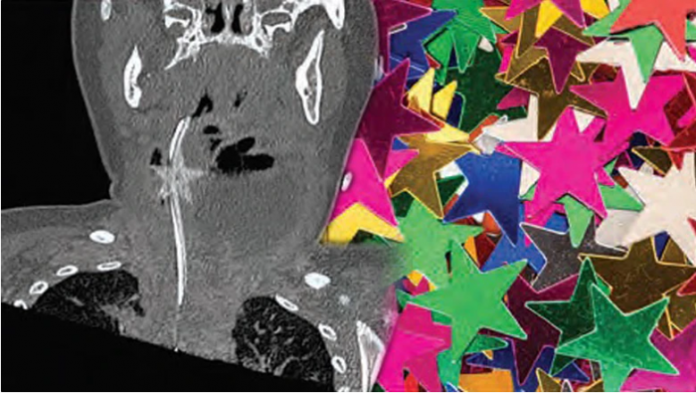 Christmas is the time to be merry and bright, but doctors have revealed one popular Yuletide decoration that could be an unexpected choking hazard.

The case was recalled in the Medical Journal of Australia, published today.

The nine-month-old girl, who has not been named, was initially brought to hospital after a choking episode where her mother spotted blood in her saliva.

She was discharged after an “unremarkable” physical examination, but came back two days later and was even sicker.

Over the next week, she was treated, discharged and brought back to the hospital, baffling doctors. She was diagnosed with bronchiolitis then a viral upper respiratory tract infection, but no treatment helped.

Then during a scan, the tiny culprit was spotted – a little plastic star was embedded in her windpipe. She underwent an emergency surgery and has since recovered well.

In the letter published today, the authors warn of the potential dangers that can come from the confetti.

“While uncommon, the potential for similar cases to present over these Christmas holidays exists.”

Despite their flexibility, the authors say the sharp points of the star increase the risk that it will get stuck in the windpipe.

“Their reflective surfaces attract the interests of young children with a propensity to place things in their mouths,” the authors added.

The authors suggested it may be worth adding warning labels on the decorations.