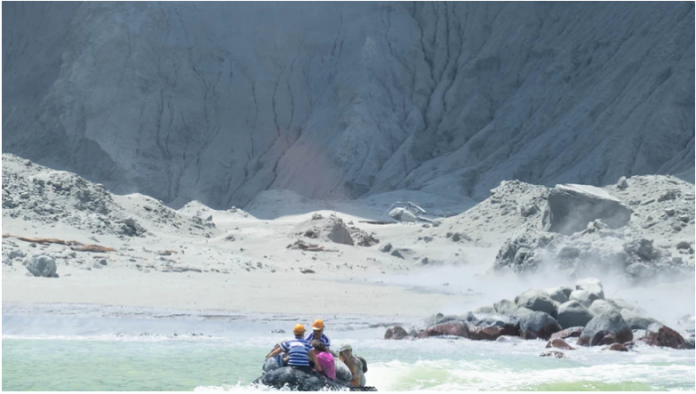 9.32pm: This has also come in from St John. Eleven helicopters and 12 ambulances transported patients to various hospitals including Whakatane, Tauranga, Middlemore and Auckland City, by air and road.

Injuries ranged from critical and serious to moderate and minor. “It has been an exceptionally complex scene.”

9.30pm: Deputy Commissioner Tims said there were likely to be double figures of people remaining on the island, but they were unsure of the exact numbers. Police were currently on mainland New Zealand.

9.28pm: The five people who died were part of 23 taken from the island. The remaining 18 all suffered injuries of some description – some of them suffered severe burns.

9.27pm: Currently there is a no fly zone over the island. Police will continue to reasses whether it is safe to return to the island but there is no timeframe on that decision.

9.25pm: Those in New Zealand concerned for the safety of loved ones can contact police on the 105 number, for those overseas a number will be provided while the Red Cross have set up a page for people to register as safe or to make inquiries.

9.22pm: A number of the tourists have come from the Ovation of the Seas cruise ship.

9.19pm: The five dead were rescued from the island earlier in the day, they are a variety of nationalities, police have said.

9.15pm: Deputy Commissioner Tims says they are unsure if anyone is still alive on the island – and the number of people remaining on the island. Officers are working to establish this information.

9:14pm: Emergency services are unable to access the island at this point with the physical environment deemed unsafe for them to return. “It is important we consider the health and safety of those who are going rescue those on the island,” Deputy Commissioner Tims said.

9.12pm: A number of people have been burned in the eruption with patients transported to Whakatāne and Middlemore hospitals.

9:10pm: The press conference is now getting underway. Deputy Commissioner John Tims has confirmed that five people are now dead.

8:40pm: Police will be giving another press conference about the eruption at 9pm, where the latest details will be revealed.

“A Royal New Zealand Air Force P-3K2 Orion aircraft has flown over White Island carrying out surveillance over the area, and two NH90 helicopters have flown to Whakatane to assist.

8:25pm: GeoNet has announced the suspension of their White Island webcams while rescue efforts continue.

“Our sympathies are with those families affected by the Whakaari/White Island eruption.

“While rescue and recovery operations are underway, we are suspending the broadcast of our webcams on the volcano and removing the images of the moments before the eruption.

“Thank you for your understanding.”

8:15pm: Auckland’s Middlemore Hospital confirmed there are two patients with critical injuries from the eruption receiving treatment there.

7:45pm: Prime Minister Jacinda Ardern will leave for Whakatāne tonight, more on her response in link below.

7:20pm More images have emerged of the eruption’s aftermath.

6:45pm: Mr Tims said police were not in a position to say whether the person who died was a New Zealander or a foreigner.

6:40pm: Deputy Commissioner of District Operations John Tims said that 23 people had been taken from the island but it was unclear how many people remained there.

6:35pm: Police have confirmed there has been at least one fatality in the White Island eruption, with more likely.

5:55pm: The third remaining Auckland Westpac Rescue Helicopter has been sent from Auckland City Hospital to Whakātane Hospital with blood.

5:45pm: Dramatic footage from the eruption has emerged on Twitter from a tour boat. One of the videos shows people stranded on a rock while the eruption occurs behind them.

5:35pm: Waikato Hospital has confirmed they will be receiving four patients to the burns unit from the White Island eruption.

5:20pm: GNS Volcanologist Brad Scott told 1 NEWS there is a “50/50 chance” another eruption “will occur or, whether it’ll remain quiet for a few hours or a few days.

“The volcano’s been putting its hand up and has been pointing to wanting to do something for several weeks now,” he said.

5:05pm: Police have just issued an update, stating that after initially believing around 100 people were on or near White Island at the time of the eruption, they now believe there were “fewer than 50”.

A number of those on the island are still unaccounted for police say, and at least one person transported back to shore has been critically injured.

5:00pm: GeoNet has confirmed the time of the eruption was 2:11pm this afternoon, only a minute after people were spotted walking near the crater rim on a webcam.

The eruption was “an impulsive, shortlived event and affected the crater floor. Activity appears to have diminished since the eruption,” GeoNet says.

“Ash fall appears to be confined to the island and we do not expect more than a minor amount of ash to reach East Cape in the coming hours.

“There remains significant uncertainty as to future changes but currently, there are no signs of escalation.”

4:55pm: A Port of Tauranga spokesperson has confirmed that some of the people on White Island were from the cruise ship Ovation of the Seas.

The tour group headed out to the island this morning.

4:45pm: Boats have begun arriving at a wharf in Whakatāne ferrying injured back from the island.

Some are being loaded into ambulances behind white sheets set up by police.

4:40pm: Auckland Rescue Helicopter Trust’s Westpac one and two helicopters are on their way to White Island from Whakatāne Airport where multiple assets are staged. This picture just in.

4:25pm: The Prime Minister says the 100 people on or around White Island at the time of the eruption are believed to mainly be tourists.

4:15pm: In her Post Cabinet address, Prime Minister Jacinda Ardern has just confirmed there were: “Around 100 people on or around the island at the time of the eruption, and some are unaccounted for.”

4:10pm: Director of Operations for St John Norma Lane has given 1 NEWS an update on the White Island rescue operation.

According to Ms Lane, there are seven helicopters on their way which will be bringing patients back to Whakatāne Airport.

There are up to 20 casualties, but “there could be more”.

The wind direction means there is a safe space for the helicopters to land at present.

3:50pm: Whakatāne Mayor Judy Turner has issued a statement on the eruption: “I’ve got limited understanding at present other than there’s been an eruption, that there have been some people who were on the island at the time, who have had some injuries.

“I’m not sure of the extent or nature of those injuries and that emergency services are all waiting for them to be returned from the island so they can attend to them.”

3:45pm: “It didn’t look good” – Fisherman says White Island eruption looked like ‘a hell of an explosion’, video at link.

3:40pm: A St John spokesperson has confirmed that “up to 20 patients” are requiring medical assistance on the island.

Five helicopters have been sent, along with a St John ambulance crew via the Coastguard.

A triage will be established on the erupting island to treat patients.

3:35pm: Civil Defence has issued a warning that ashfall may impact areas that are “distant from the volcano”.

They warn people to consider staying indoors in affected areas.

They took off from their Auckland base at Ardmore at 2.50pm.

3:15pm: A group of people could be seen walking near the crater rim on a GeoNet webcam at 2.10pm, about 20 minutes before the eruption occurred.