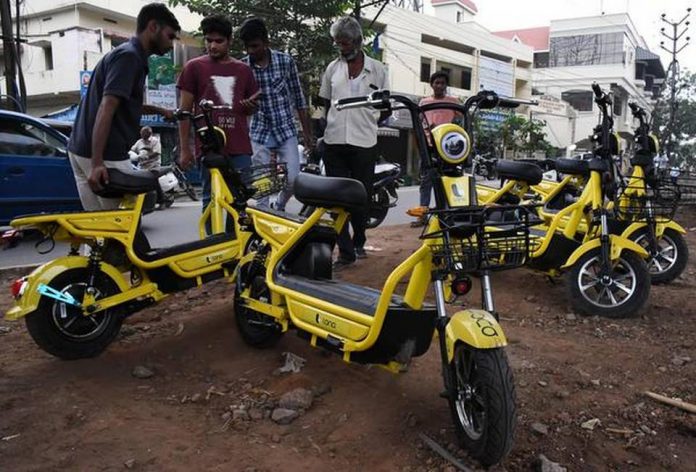 Bengaluru-based startup launches service in Vijayawada
Bright yellow electric bikes, parked under the Benz circle flyover at the Ramesh Hospital junction, have caught the attention of passers-by on Monday evening, and some of them stopped by to enquire about their sudden appearance.

The bikes are owned by Lona, an electric bike rental startup based out of Bengaluru, which commenced its services in the city a couple of days ago. “Within 72 hours of beginning operations, we have received almost 300 bookings,” said D. Hemant, marketing manager, Vijayawada.

Currently, 40 bikes each have been placed at two spots, one near the Aayush Hospitals and the other at the Ramesh Hospital junction, and people could avail the service round the clock at ₹10 per 30 minutes.

Pollution control
Launched with the motto ‘micro-mobility solution for your daily needs’, the service also aims at curbing the rising air pollution levels. “Cabs burn a hole in one’s pocket and also leave behind significant pollution and carbon footprint. Using the e-bike will facilitate safe and affordable transport for people without damaging environment,” said Mr. Hemant.

Since the geographical area of Vijayawada was small, the startup found it suitable to launch the service here.

With a top speed of 25 kilometres per hour, the lithium-ion battery-operated bike is said to travel 70 km on one charge. In order to book the bike, one needs to download the App on a mobile or give a missed call to 040-4189-20182. Once booked, the app will direct the person to the nearest location where the bike is parked. After using it, customers can leave the two-wheeler in any location and the company executives will pick it up and park it at the designated spot.

Based on public response, Mr. Hemant said, by March the company planned to introduce 1500 e-bikes to be placed at over 200 locations, each within a distance of 1.5 km.

Delivery agents enthused
Several delivery agents seen enquiring about the bike believed that this rental service could be helpful to them in the event something happens to their bike.

“Sometimes when there is a problem with our bike, say a punctured tyre, we get worried about how to complete the delivery. Now we can take this bike and complete our delivery first, and then think about fixing the flat tyre,” felt Sai Kishore, a delivery agent.