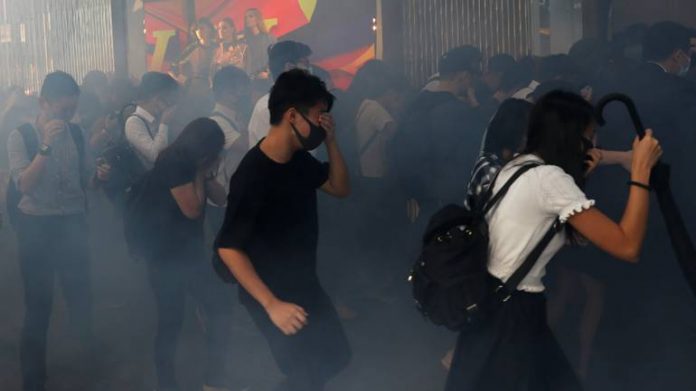 Riot police were deployed at metro stations across the territory and large queues were forming at railway platforms as commuters made their way to work
Hong Kong riot police, on November 12, fired tear gas at a university campus on, a day after a protester was shot and a man set on fire in some of worst violence to rock the Chinese-ruled city in more than five months of anti-government demonstrations.

Some railway services were suspended and roads closed across the Asian financial hub for a second day, with long traffic jams building in the morning rush hour.

Riot police were deployed at metro stations across the territory and large queues were forming at railway platforms as commuters made their way to work.

Universities and schools cancelled classes, with students, teachers and parents on edge a day after police fired tear gas and students hurled petrol bombs on some campuses.
More than 260 people were arrested on November 11, police said, bringing the total number to more than 3,000 since the protests escalated in June.

The metro station at Sai Wan Ho on eastern Hong Kong island, where a 21-year-old protester was shot on Monday, was among those closed.

A water cannon truck was stationed outside government headquarters, where the city’s Executive Council was due to hold its weekly meeting.

Hong Kong’s embattled leader Carrie Lam said on Monday the violence in the former British colony has exceeded protesters’ demands for democracy and demonstrators were now the enemy of the people.

Protesters are angry about what they see as police brutality and meddling by Beijing in the freedoms guaranteed under the “one country, two systems” formula put in place when the territory returned to Chinese rule in 1997.

China denies interfering and has blamed Western countries for stirring up trouble.

Trump shocks IT professionals, American companies will not be able to hire Indians

Russian scientists claim to have discovered the weakness of coronavirus: Normal water

PAK’s new map: Ladakh-Siachen and Junagadh told themselves, then India said – this foolish...

Pakistan's PM Imran Khan has described the new map as representing the expectations of the people. (adsbygoogle =...

LPG Gas Booking: How to book Indane Gas Cylinder from WhatsApp, this is the...

You can get 3.21 lakh rupees through investing in PPF account, you have to...

Public Provident Fund (PPF): PPF account can be opened through post office and bank. With this help people add a lot of funds. ...

Nilangekar was admitted to a hospital in Pune after the corona virus was confirmed last month. (adsbygoogle =...

‘Shri Ram’ can be useful to save tax, know these rules related to donations

Tax can be paid by donating to Ram Mandir Nirman CBDT did a cbdt notification in the month of May Tax Rebate is...