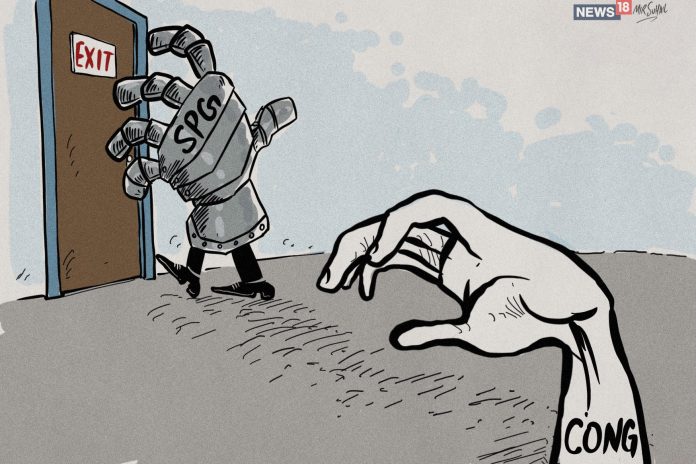 The Gandhis will be without SPG cover after 28 years. Prime Minister Narendra Modi will now be the only person being protected by the elite SPG commandos.

The family will now get ‘Z+’ security by the Central Reserve Police Force (CRPF) on an all-India basis, they said. Although the Gandhis have not been informed of the decision yet, CRPF personnel have already been stationed at the 10 Janpath residence.

The decision, the sources said, was taken after multiple security agencies carried out a threat perception assessment and found there was no direct threat to them. “Recently, a decision was taken after assessing threat inputs from all agencies,” senior officials aware of the developments said.

The SPG cover is the highest tier of security in the country. Officials assured that the security of the Gandhi family will not be compromised. The government had recently also withdrawn the SPG cover of former Prime Minister Manmohan Singh.

The Gandhis will be without SPG protection after 28 years. They were included in the VVIP security list following an amendment in September 1991 in the SPG Act of 1988.

Prime Minister Narendra Modi will now be the only person being protected by the elite SPG commandos.

Under the Z-plus security, the Gandhis will have commandos from the paramilitary force in close proximity besides guards at their homes and where ever they travel in the country, the official said. SPG protectees, under the rules, are provided with guards, hi-tech vehicles, jammers and an ambulance in their carcade.

The SPG, a force of roughly 3,000 active personnel, was formed in 1985 following the assassination of former Prime Minister Indira Gandhi by her own bodyguards in 1984.

The move to withdraw the security layer is likely to take on political overtones, but the sources said that security cover of all protectees is reviewed time to time and downgraded whenever required.

Recently, the SPG cover given to Rahul Gandhi had come under scrutiny after certain “gaps” were found in his security detail. It was reported that on 143 of his 156 trips abroad in the last four years, Rahul Gandhi did not take the SPG with him.

The government had in October then issued fresh guidelines related to the SPG in a move that was seen as an attempt to track the Gandhi family. Under the new directives, it became mandatory for SPG personnel to accompany their charges at all times, including on personal foreign visits.

In August, the government had also downgraded the security cover given to former Prime Minister Manmohan Singh to the Z-plus category.

According to procedures laid down by the SPG Act, 1988, Singh was entitled to SPG cover for one year after he demitted office in 2014. His SPG security cover was renewed annually after a review of the threats faced by him and his wife Gursharan Kaur.

The SPG Act, enacted by Parliament in 1988, was initially supposed to provide security to only the prime minister and former prime ministers of the country. The Act was amended after the assassination of Rajiv Gandhi to include the immediate family members of former prime ministers, paving the way for Sonia Gandhi as well her children to get SPG security.

The need for a separate force for guarding the prime minister of the country was felt after Indira Gandhi was assassinated by her own security guards on October 31, 1984.