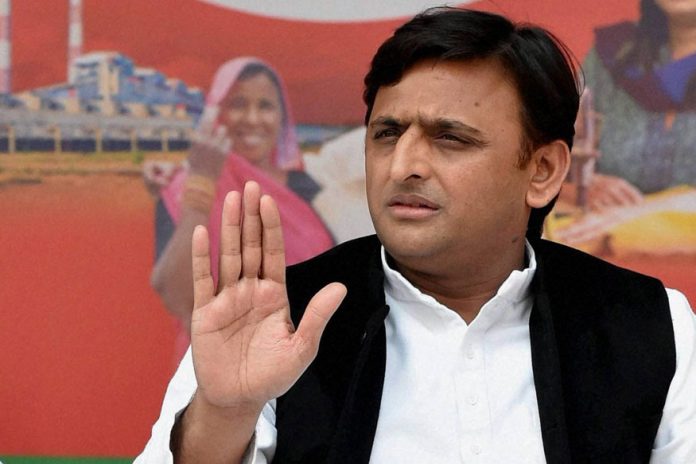 The Samajwadi Party chief Akhilesh Yadav on Tuesday hit out at the Yogi Adityanath government over the issue involving the investment of Rs 2600 crore of the UP power corporation’s employees provident fund in scam-hit DHFL.

The SP chief also said that CM Yogi Adityanath was so weak that even after wanting to remove the Power Minister, he can’t remove him. “The UP government is just busy hiding the facts, even though key departments like power are facing a crisis today. In the FIR copy, it is clearly mentioned that on the day when the money was transferred to the DHFL SP government was not in power. DHFL was not given a single penny during our regime if anyone is responsible for such a scam it the CM himself. He has been taking a review of the works done by the departments in the last two years, but why was nothing done in the 2.5 years of the regime?,” the SP chief asked in a press conference.

He further demanded a probe into the issue by a sitting-High Court or a Supreme Court judge. “The government in a rush recommended the probe to the CBI, however, the truth will only be unearthed when the probe is done by a sitting judge of the High Court or the Supreme Court. Also, the CM of the state should resign immediately, he should tender his resignation before he inaugurates today Medanta hospital today, which was made during the SP regime,” added the state’s former CM.

The SP chief said that the state was going through one of its worst phases and it was not Ram Rajya but it was Nathu Ram Rajya as anyone can be get killed anywhere in the state. “Today unemployment is at its peak but our government has once again started deflecting the issue by raking the issue of black money which they claimed was curbed earlier during the demonetisation,” Akhilesh Yadav said.

Earlier on Tuesday, the Chief Minister’s office had targeted SP chief over his relations with the then MD of UPPCL, AP Mishra who has been detained for questioning by the Economic Offence Wing. “The corrupt are crying foul as the CM strikes on corruption as per his zero-tolerance policy. The former MD of UPPCL who was the blue-eyed boy of Akhilesh Yadav and was accorded extension thrice has been arrested. So Akhilesh Yadav should state what his relation with him,” the Chief Minister’s office tweeted.

The state government had on Sunday claimed that the decision to invest EPF money in DHFL was taken by the previous government headed by Akhilesh Yadav of the Samajwadi Party in April 2014 and the process of investment was carried forward in 2016.