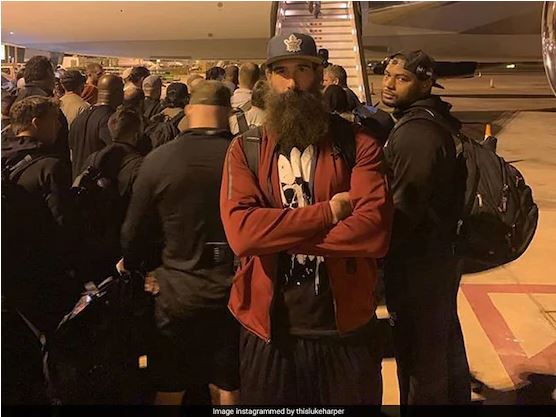 WWE superstars expressed their anger on social media after being stranded for hours at an airport in Saudi Arabia.
World Wrestling Entertainment (WWE) successfully hosted their annual show in Saudi Arabia, WWE Crown Jewel on Thursday. While the show was a success for the viewers, many WWE superstars were angry after they had to wait for hours to get onto the flight back to the USA. According to a report in wwe.com, more than 175 WWE superstars, crew and employees were stranded in Riyadh. The delay caused a change in the matches scheduled for Friday’s Smack Down show. Matches between Roman Reigns and Baron Corbin along with The New Day vs The Revival were cancelled
With SmackDown set to emanate live from Buffalo, N.Y., several Superstars felt so strongly that they arranged for their own separate charter in order to make it back to the U.S. for the show. Due to unforeseen issues, that charter will not land until after the live broadcast on FOX,” Mirror.co.uk reported.

“More than 175 Superstars, production crew and employees boarded a 747 charter flight back to the United States on Thursday. After the door closed, due to several aircraft problems including mechanical issues, all passengers sat on the tarmac for more than six hours,” WWE.com reported

After the delay in Saudi Arabia, several WWE superstars expressed their anger on social media, some even claiming that they will not return next year
Larry, I’m home. I guess I didn’t want it enough to pay for my own charter, but I’m home now. #NotTop20,” Luke Harper posted an image on his Instagram account.

“Bad day on Saudi Arabia, I hope to arrive before my birth,” Andrade tweeted.
At the event, Tyson Fury knocked out Braun Strowman and Brock Lesnar got his revenge as he defeated Cain Velasquez for the WWE title.