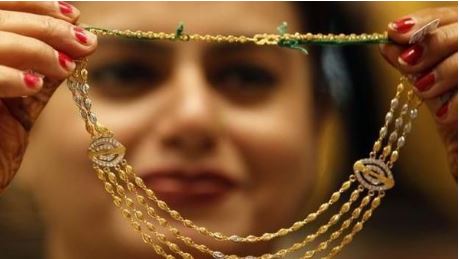 Demand for gold in India this year is likely to drop to the lowest since 2016 as elevated prices and a weak economy deter buyers in the world’s second-biggest bullion consumer, according to the World Gold Council.

Purchases may be at the lower end of a 700 to 750 ton range, the least since 666 tons three years earlier, when disruptions due to jewelers’ strikes and demonetization eroded demand, P.R. Somasundaram, the council’s managing director in India, said in an interview ahead of a quarterly report. The council had initially estimated demand between 750 and 850 tons in 2019.

Benchmark gold futures in Mumbai have rallied more than 20% this year, touching a record ₹39,885 ($562) per 10 grams in early September, while the economy is growing at the slowest pace in six years. That’s pushed third-quarter purchases to one of the lowest for the period since 2005, according to the WGC. Sales on Dhanteras, the most auspicious day in the country to buy the metal, also tumbled last month, further signaling weak demand.
The softening of prices in the final few weeks of September because of a fall in international gold prices and a stronger rupee, “actually led to expectations of a further drop and hence, didn’t aid demand,” Somasundaram said.

“The demand we have lost in 2019 is not something that has disappeared,” he said. “It is just that people would have deferred the purchase and it will come back.”

The pent-up demand combined with acceptance by consumers that “gold is not going to come down in a hurry,” and government measures to boost the economy should make 2020 a much better year, with demand estimated to rise back to between 750 and 850 tons, he said.

Consumption faces increasing competition from other mainstream investment opportunities, the council said separately in the report. Retail investors’ attention has been captured by equities, with the benchmark stock index flirting with record highs, while a well-executed marketing campaign by the local mutual funds group has generated sustained inflows into systematic investment plans by millennials, it added.
Key Figures

Indians bought 123.9 tons of gold in the July-September period, down 32% from a year earlier, pushing consumption during the first nine months of this year 5.3% lower to 496 tons

Net imports during July-September slumped 66% to 80.5 tons from a year earlier period: WGC

Scrap supply climbed 59% during the quarter to 36.5 tons, taking the January-September total to 90.5 tons

This story has been published from a wire agency feed without modifications to the text. Only the headline has been changed