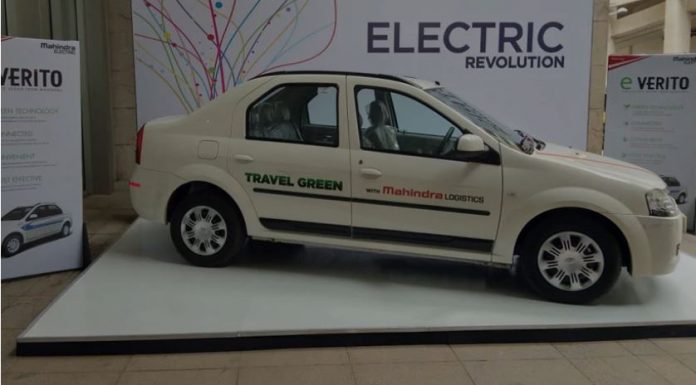 Mahindra has cumulatively sold almost 2000 units of the e-Verito electric sedan and the e-Alfa Mini & Treo electric three-wheelers during the month of October 2019.

Mahindra Electric, the EV arm of the utility vehicle manufacturer, Mahindra and Mahindra has retailed almost 2000 electric vehicles in India, in October 2019. According to a social media post by Pawan Goenka, MD & CEO, Mahindra and Mahindra Ltd., the 2000 units are the cumulative sales between e-Verito, e-Alfa Mini, and Treo. Goenka also said that this is the highest ever EV sales achieved by Mahindra in a month. While we do not have the official model wise sales numbers at the moment, sources in the know say that it’s the Mahindra Treo that has achieved the highest sales numbers out of the three models. However, sale of the Mahindra Treo electric three-wheeler is right now limited to cities like – Raipur, Ahemdabad, Lucknow, and Noida.

Upon asking for an official statement on the company EV sales, we were told that Mahindra is currently on a silent period and can’t comment on sales numbers until November 8, as that is when Mahindra will release its financial results for the second quarter of FY2019-20. And that is when we are likely to get more answers on the company’s EV sales performance.

The Mahindra e-Verito is powered by an electric motor coupled with a 72V lithium-ion battery pack. The electric sedan offers a driving range of 110 km on a full charge and takes 1 hour and 45 minutes to be fully charged using a fast charger, and about 8 hours with a regular charger. The e-Verito’s top-speed is rated at 86 km/h. The e-Alfa Mini is powered by a 120 Ah battery, powerful 1000 W motor and controller. It offers a range of 85 km on a single charge, with a top speed of 25 kmph.