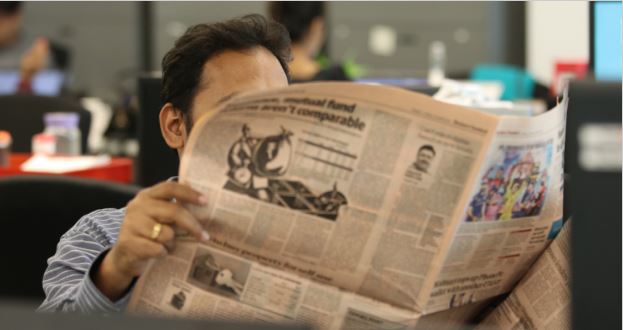 Investors’ wealth in terms of the average market capitalisation of BSE-listed companies rose by Rs 4.78 lakh crore to Rs 154.09 lakh crore recorded on November 1 from Rs 149.31 registered on October 25.

The Sensex hit a fresh record high of 40,392 on October 31 and closed the week with gains of 2.8 percent. The Nifty managed to touch 11,900 levels on November 1, but the momentum fizzled out at higher levels as investors preferred to book profits. The Sensex rose 35 points to 40,165 while the Nifty closed 13 points higher at 11,890.

For the week ended November 1, the Sensex rallied 2.83 percent while the Nifty closed with gains of 2.65 percent.

Investors’ wealth in terms of the average market capitalisation of BSE-listed companies rose by Rs 4.78 lakh crore to Rs 154.09 lakh crore recorded on November 1 from Rs 149.31 registered on October 25.

“Sensex made a new record high and will likely carry the momentum ahead. However, sustainability above 39,800 would be critical in the near future. It has potential to test 41,150 by 2019-end and above 43,000 by October 2020,” Ajit Mishra, VP Research, Religare Broking told Moneycontrol.

Below are the top 10 companies which have declared September quarter numbers this week:

Lower other income, PPoP and Net interest income (NII) also hit earnings. The bank had reported profit at Rs 964.70 crore in the year-ago period and Rs 113.76 crore in the quarter ended June.

Beating estimates, Dr Reddy’s Laboratories doubled its profit to Rs 1,093 crore in the July-September quarter, compared to Rs 504 crore reported in the same period last year. The bottom line was boosted by licensing fee and tax credit along with better operating income.

The revenue during the quarter grew by 26.4 percent to Rs 4,801 crore YoY, which included Rs 723 crore received towards licensing fee for selling the US and select territory rights for neurology brands Zembrace Symtouch (sumatriptan injection) 3 mg and Tosymratm (sumatriptan nasal spray) 10 mg, to Upsher-Smith Laboratories, LLC.

The revenue from North America business remained flat YoY, but the same declined 13 percent sequentially on account of price erosion and lower volumes.

“Further impact on account of the voluntary recall of ranitidine and temporary disruption in supplies due to logistics issues faced during this quarter,” Dr Reddy’s said.

Indian Oil Corporation (IOC) reported standalone net profit at Rs 563.4 crore for the July-September period, an 84.3 percent quarter-on-quarter (QoQ) drop due to higher inventory losses. The oil-marketing company’s profit stood at Rs 3,596 crore in the quarter ended June. The fall was despite lower tax cost, which was Rs 251 crore for the quarter against Rs 1,783.3 crore in the June quarter.

JSW Energy on November 1 posted about 12 percent rise in consolidated net profit at Rs 353 crore for the September quarter of this fiscal mainly due to lower fuel and finance cost. The company had reported a profit of Rs 316 crore in the year-ago period, a BSE filing said.

JK Tyre & Industries on October 30 reported over three-fold jump in consolidated net profit to Rs 167.70 crore in the September quarter driven by gains from deferred tax liability. The company had posted a consolidated net profit of Rs 45.78 crore in the same period last fiscal, JK Tyre & Industries said in a regulatory filing.

Cement maker the Ramco Cements on October 30 said its standalone profits for the July-September quarter jumped 68 percent to Rs 168.15 crore. The city-based flagship company of diversified conglomerate Ramco Group had recorded profits at Rs 114.47 crore during the corresponding quarter of the previous year.

The lender’s total income rose to Rs 3,013.74 crore in the September 2019 quarter, compared with Rs 2,600.47 crore earned in the corresponding period of the previous financial year, the bank said in a regulatory filing on October 30.

Earnings before interest, tax, depreciation and amortisation (EBITDA) rose 5.5 percent at Rs 635 crore against Rs 602 crore and EBITDA margin was up at 20.6 percent versus 20.3 percent YoY. Tax expense for the quarter stood at Rs 38.8 crore versus Rs 120 crore.

Micro-financier CreditAccess Grameen on October 30 reported a rise of 37.3 percent in net profit at Rs 100.9 crore for the second quarter of this fiscal. The company’s net profit stood at Rs 73.5 crore in the July-September period of the previous fiscal.