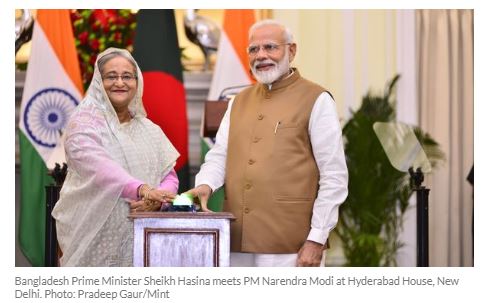 NEW DELHI: India and Bangladesh on Saturday hailed bilateral ties as “model good neighbourliness” as the two sides signed seven agreements and the prime ministers of the two countries inaugurated three projects to deepen their partnership.

One of the three projects jointly inaugurated by India and Bangladesh allows India to buy liquefied petroleum gas from Bangladesh for consumption in India’s northeastern state of Tripura. The LPG will be transported by Bangladeshi trucks to the Indian state cutting down transport times and costs. The second was the inauguration of a skill development centre that will provide basic as well as advanced training some 200-300 Bangladeshi youth on an annual basis for employment in the small and medium scale industry sectors.

The seven pacts signed included one on the terms for the use of the Chattogram and Mongla ports in Bangladesh for movement of goods to and from India. The agreement to enable this was signed in October last year. A second pact signed was for India to draw 1.82 cusecs (cubic seconds) of water from Bangladesh’s Feni river for use by India in Tripura state.

In their comments to reporters, neither leader gave any indication whether the issue of India’s move to identify illegal residents in Assam state was discussed. India has prepared a National Register of Citizens (NRC) that lists out the names of Indian nationals while leaving out those who have not been able to prove their identity as Indians. Some 1.9 million people have been left out of the register and there are concerns in Dhaka that Bangladesh could be asked to take these people. Bangladesh already houses a large number of Rohingyas who fled Myanmar.

A joint statement said the two leaders “held productive and comprehensive discussions during which they reviewed all aspects of the bilateral relations, and exchanged views on regional issues.”

“Both Prime Ministers agreed to fully utilize various opportunities for advancing mutually beneficial partnership in both conventional and non-conventional areas, and to ensure that this irreversible partnership enhances the legacy that started with the Great War of Liberation of Bangladesh,” it said.

“Both leaders emphasized the importance of effective border management for ensuring a tranquil, stable and crime free border. Towards this goal, the Leaders directed their respective border forces tocomplete border fencing at all pending sectors at the International Border between both the countries at the earliest. Both Leaders also agreed that the loss of civilian lives at the border is a matter of concern and directed the concerned border forces to enhance coordinated measures to work toward bringing such border incidents down to zero,” the joint statement further said.

“This multifaceted cooperation” had raised the profile of bilateral relations making it “ a model of good neighbourliness before the world,” she said. “I firmly believe this cooperation will be strengthened in the future,” she added.

In his remarks, prime minister Narendra Modi pointed out that the three projects jointly inaugurated by the two prime ministers on Saturday were among 12 unveiled in the past year. The three projects unveiled on Saturday were in three separate but key areas like energy, skill development and people to people ties. The aim of all the three was to give a better life to the people of both countries, he said. “This is the fundamental principle underlying relations between the two countries” Modi said referring to the common welfare of people of both countries. The LPG supply pact was particularly a “win-win” situation, he said pointing out that it would benefit the economies of both countries. India gives priority to its cooperation with Bangladesh, Modi added.