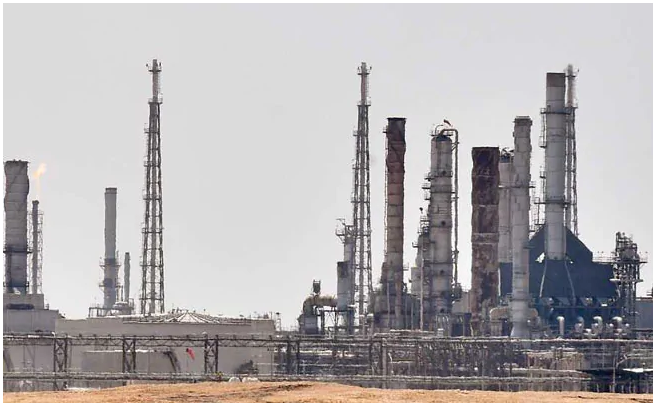 US President Donald Trump said he was waiting to hear from the Saudis on “who they believe was the cause of this attack, and under what terms we would proceed!”

US President Donald Trump said Sunday that the United States was prepared to respond to the devastating attacks on two oil installations in Saudi Arabia that halved the state oil company’s production output, while Iran rejected US accusations that it was responsible.

“There is reason to believe that we know the culprit,” Trump said in a tweet Sunday evening. He said the United States was “locked and loaded depending on verification.”

Trump did not name Iran, as Secretary of State Mike Pompeo had on Saturday, nor specify whether he was contemplating a military response. He said he was waiting to hear from the Saudis on “who they believe was the cause of this attack, and under what terms we would proceed!”

His administration was contemplating what US officials characterized as a serious military response, though some in the Pentagon were said to be urging restraint. The officials spoke on the condition of anonymity to discuss internal deliberations. Trump met with Defense Secretary Mark Esper on Sunday afternoon.

Oil futures jumped Sunday evening as markets opened for the first time since the attacks. The price of Brent crude surged 18 percent before falling back to 12 percent; the US benchmark West Texas intermediate climbed 12 percent before easing to a 10 percent gain. Trump said he had authorized the release of oil from strategic reserves, “if needed,” to blunt the market impact of the attacks.

The attacks on Saturday could upend Trump’s hopes for new US-Iran negotiations, an effort in which he has faced opposition from close ally Israel and many of his own hawkish foreign policy aides. Trump said last week that he would not rule out a personal meeting with Iranian President Hassan Rouhani this month.

The Houthis, a rebel group in Yemen allied with Iran, claimed responsibility for the attacks, saying it had sent a fleet of drones toward the Aramco facilities in eastern Saudi Arabia. The most pointed public US comment has come from Secretary of State Mike Pompeo, who blamed Iran Saturday for what he called “an unprecedented attack on the world’s energy supply.”

There was “no evidence the attacks came from Yemen,” Pompeo said in a tweet; he has not offered evidence for his claims. His comments, along with a US government damage assessment of one of the stricken oil facilities that suggested the attack might not have come from Yemen, fed speculation that the strikes had been launched from Iran, or by Tehran’s allies in neighboring Iraq.

The US government’s working assumption is that the attacks did not emanate from Yemen, meaning the Houthis either were not involved in the attacks or did not carry them out on their own, according to a US official with familiarity with ongoing discussions. The official cited the advanced nature for the attack as reason for that belief.

Saudi Arabia, which said Saturday that it was still probing the source of the attack, was silent Sunday about the possible culprit. Media outlets in Kuwait, which sits between Iraq and Saudi Arabia, reported that officials were investigating a drone sighting over the country, deepening the mystery.

The possibility that Iran had played a direct role in an attack on Saudi Arabia’s oil infrastructure unnerved a region already reeling from multiple conflicts: a war in Yemen, a feud between Qatar and its neighbors and a confrontation between the United States and Iran.

The Trump administration has made isolating Iran a centerpiece of its foreign policy. The administration withdrew from the 2015 nuclear deal Tehran struck with world powers and imposed economic sanctions and an embargo on oil exports.

The United States blamed Iran for a spate of mysterious attacks on commercial tankers in the Persian Gulf region; In June, Iranian forces shot down a US Navy spy drone. The incident nearly prompted a US counterstrike.

Trump said he called the operation off at the last minute, saying it would be disproportionate and a hindrance to potential diplomacy.

That incident opened a window on Trump’s dual approach to Iran, which has increasingly included invitations for negotiations to replace the 2015 deal with one he says would be stronger.

Trump’s desire to meet Rouhani with no preconditions has roiled his own advisers, it and was a factor in the departure last week of former national security adviser John Bolton. Bolton opposed calling off the strikes in June and was deeply skeptical of the value of new diplomacy with Iran. A person close to Bolton said Saturday that Bolton had submitted his resignation after a suggestion from Trump last Monday that the United States could drop some sanctions as a sweetener for talks.

A senior Kuwaiti diplomat said his government was “extremely concerned” about the region’s stability after Saturday’s attacks. The diplomat, who spoke on the condition of anonymity because he was not authorized to speak to the media, did not say whether Kuwait believed Iran was directly involved.

The attack on Aramco “aimed to disrupt oil markets worldwide and to undermine regional stability,” he said. “It’s a very dangerous period in the gulf region.”

Officials in Iran and Iraq pushed back forcefully Sunday against allegations the attacks had come from their territories.

Iraq’s prime minister, Adel Abdul Mahdi, denied the strikes had been launched from his country. He said his government would “deal firmly” with anyone trying to attack neighboring countries from Iraq.

Houthi spokesman Mohammed Albukhaiti reiterated the group’s claim that it had carried out the strikes. “We confirm that the Yemeni forces are the ones who hit the oil fields, and everyone knows our credibility, in every attack we announce,” he said in a telephone interview.

“We don’t need to provide evidence,” he added, and pointed out that Pompeo had not provided any proof that strikes had come from Iran or Iraq.

The weekend incident will probably heighten concerns at the Pentagon that increasing tensions with Iran expose US troops, who are stationed at facilities across the Middle East, to greater risk of Iranian-sponsored attack.

Israeli officials said Prime Minister Benjamin Netanyahu was not expected to comment on the strikes in Saudi Arabia or Pompeo’s assertion of Iran’s role. But many within Israel’s security community were ready to see Teheran’s fingerprints on the sophisticated attack.

“They are trying to prove what they have said in the past,” said Amos Yadlin, a former chief of Israeli military intelligence. “That if they are not going to export oil, no one will export oil.”

Netanyahu, who is days away from a too-close-to-call election, has based his campaign largely on warnings of Iran’s destabilizing moves in the region. Israel is widely assumed to have been behind recent strikes on Iranian-backed militia targets in Iraq and Lebanon, and Netanyahu this month displayed intelligence images of what he said were previously undisclosed Iranian nuclear weapons facilities.

Bernard Hudson, a former director for counterterrorism for the CIA, said the attacks likely involved a mixture of drones and cruise missiles.

“It used to be that only governments had air forces, but drones have democratized violence from the sky,” said Hudson, now a fellow on Gulf Security issues at Harvard University. “The Houthis, with help and advice from Iran, have perfected it to a level no one else has done.”

Hudson, an investor in drones, called the industry “immature.”

“But the counter-drone industry is exceptionally immature.” For military personnel, he said, the biggest problem is “detection at a distance. . . . If you don’t detect it until it’s on top of you, you have very little time to respond.”

The blasts Saturday struck facilities in the districts of Khurais and Abqaiq, Saudi officials said.

Khurais, the site of one of Saudi Arabia’s largest oil fields, is believed to produce about 1.5 million barrels per day. The kingdom’s largest oil processing facility is in Abqaiq, built to process about 7 million barrels a day of oil to be shipped out of the Persian Gulf to foreign markets.

Saudi Arabia produced 9.85 million barrels of oil a day in August, or about 10 percent of the global supply.

Aramco said Saturday that the attack by “projectiles” had forced it to suspend production of 5.7 million barrels of crude per day, or more than half of the kingdom’s output.

An assessment by the US government found that 15 structures at Abqaiq were damaged on the west-northwest-facing sides – not the southern facades, as would be expected if the attack had come from Yemen.

Oil industry analysts were still trying to assess the extent of the damage. Aramco initially said it would be ready to supply all its customers on Monday, but by Sunday it was clear that would not be possible.

“In the short term, Saudi Arabia will be able to maintain exports and use reserves to ensure supply security,” the information analysis firm S&P Global said. But “any evidence of prolonged disruption of production would heavily impact [OPEC’s] spare capacity and the ability of International Energy Agency to use Strategic Petroleum Reserves to shore up the market.”

The firm said “higher oil prices would add to the headwinds facing the global economy” and “could tip it into recession, which would itself limit any prolonged period of excessively high oil prices as demand rebalances the market.”

Trump tweeted that he had authorized the release of supplies from the US Strategic Petroleum Reserve “in a to-be-determined amount sufficient to keep the markets well-supplied.”

Customers would also have to align location and quality of oil, an important factor in lining up crude with refineries capable of using it. As of Friday, the Strategic Petroleum Reserve held 644.8 million barrels of crude in four sites in Texas and Louisiana, according to the Energy Department.