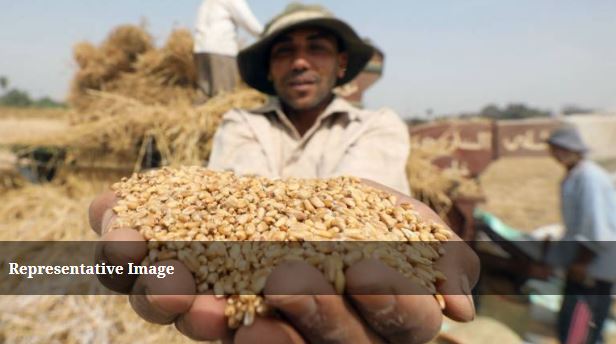 The report, prepared by the Global Commission on Adaptation (GCA), led by former UN secretary general Ban Ki-moon, was released at the United Nations Convention to Combat Desertification (UNCCD) COP 14 being held at Greater Noida. India has taken presidency of the COP 14 from China till 2021.

Food security will be hit sharply due to climate change and land degradation as global demand will increase by 50 per cent, but yields may decline by 30 per cent by 2050, said a global report released at the ongoing conference of parties.

The report, prepared by the Global Commission on Adaptation (GCA), led by former UN secretary general Ban Ki-moon, was released at the United Nations Convention to Combat Desertification (UNCCD) COP 14 being held at Greater Noida. India has taken presidency of the COP 14 from China till 2021.

India is among the 19 countries, which are a part of the GCA, and Environment Secretary C K Mishra is one of its commissioners.

Releasing the report, UNCCD Executive Secretary Ibrahim Thiaw said desertification was not an imaginary scenario and if climate adaptation was not invested in, inequalities will rise and affect the most vulnerable communities.

“Desertification is not an imaginary scenario as data is with us now. Degradation of habitat is affecting the species and most vulnerable communities.

“By 2050, we will need 50 per cent more crops to feed 10 billion people. The focus so far has been on climate mitigation but this should not be done at the expense of adaptation,” Thiaw said.

According to the report, the demand for food will increase by 50 per cent globally and yields may decline by up to 30 per cent by 2050 in the absence of ambitious climate action.

“A more resilient food future will rely on sharp increases in agricultural research and development, which has demonstrated benefit-cost ratios between 2:1 and 17:1,” the report said.

It emphasised on the need for a sustainable, climate-smart production and change in access to information, innovative technologies, and finance to enhance the resilience of 500 million small-scale farming households whose livelihoods are most critically impacted by climate change.

“Without adaptation, climate change may depress growth in global agriculture yields up to 30 per cent by 2050. The 500 million small farms around the world will be most affected,” it said.

According to the report, at present, 3.6 billion people do not get sufficient water for atleast a month per a year. The number of sufferers may rise to over 5 billion by 2050, it said.

“Rising seas and greater storm surges could force hundreds of millions of people in coastal cities from their homes, with a total cost to coastal urban areas of more than 1 trillion USD each year by 2050,” it said, adding that climate change could push more than 100 million people within developing countries below the poverty line by 2030.

Speaking at the release, Agarwal said that climate change poses a worldwide threat, and in India, more than 250 million people who live below the poverty line, will face its impacts.

“Unavailability of resources, financial insecurities and the inability to cope with changing weather systems will put added pressure on the poorest communities. Building climate resilience by developing a strong adaptation plan based on sustainable development is the need of the hour,” Agarwal said.

He said it will benefit governments, businesses and the communities, thereby contributing to a healthy and flourishing economy

“In other words, failing to seize the economic benefits of climate adaptation with high-return investments would undermine trillions of dollars in potential growth and prosperity,” it said.

India is hosting the COP 14 with Environment Minister Prakash Javadekar as its president for the next two years. Nearly 200 countries are attending the mega event with over 8,000 participants from across the globe.

Based in the US, Global Environment Facility (GEF) is an international partnership of 183 countries, international institutions, civil society organisations and private sector that was established in 1992 to address global environmental issues.