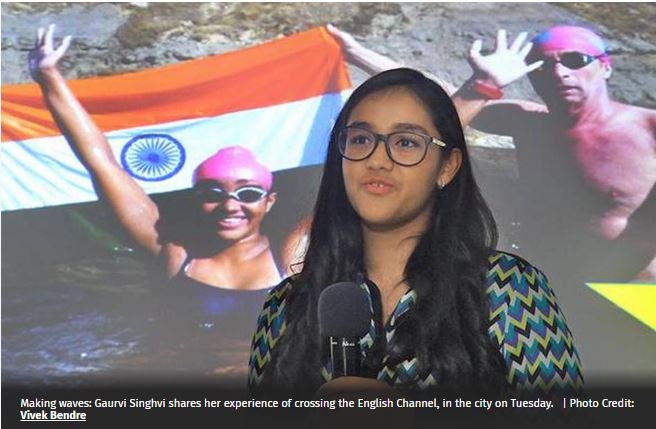 Gaurvi Singhvi (16) from Udaipur has made India proud by becoming the world’s youngest open water swimmer to cross the English Channel in 13 hours and 26 minutes last month.

Starting from Samphire Hoe beach in England at 3 a.m. on August 23, Gaurvi reached Cap Gris-Nez in France by 4.28 p.m. She said, “More people have climbed Mount Everest than swum the English Channel. Open water swimming is not common in India due to the high-risk factor and the lack of exposure to adventure sports. For there to be more open water swimmers, we need proper facilities in every small town. But it also depends on the will of swimmers. I urge every one of them to try open water swimming once.”

The record for being the youngest swimmer to cross the English Channel is held by Thomas Gregory of United Kingdom, who achieved the feat in 11 hours, 54 minutes on September 6, 1988, at the age of 11. The Channel Swimming Association has since raised the minimum age limit to 16 years.

Shubh Singhvi, Gaurvi’s mother, said that initially she was scared as Udaipur is a small town and the water quality is poor. She said, “I was not sure about the facilities too. But when she won an under-14 swimming competition, I felt it was not fair on my part to hold her back from something she is so good at.” Gaurvi’s training, which started two years ago, included yoga, meditation, ground training, speed and endurance training. Two months before her achievement, she had completed a 14-hour practice swim in the lakes of Udaipur. “I trained her for six months and used to make her swim four km every day,” said Sukhbinder Singh, her speed and endurance trainer.

A State swimming champion, Gaurvi is also the youngest to cover 47 km in the Indian Ocean, in 9 hours, 22 minutes, starting from Khar Danda in Juhu to Gateway of India.

The English Channel swim, however, presented a fresh set of challenges. She said, “The water was cooler and the currents were harsher than in India. During my swim across the Indian Ocean, the water was warm, there were oil spills, and the water near Gateway of India had sewage waste. Fishing nets obstructed my swim and I had prawn bites.”

Gaurvi is equally good at academics, securing 93% in her SSC exams. She has been a motivational speaker at TEDx, , FICCI and other corporate events, and was selected as the youth icon for Udaipur under the the Election Commission of India’s SVEEP initiative. “I have been dreaming of completing the English Channel swim for the past three years. Now that I have completed it, I will think of my next milestone,” Ms. Singhvi said.